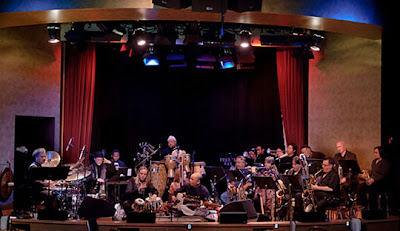 For the last dozen years, percussionist-composer Anthony Brown's innovative Asian American Orchestra has reinvented classics of American music by composers Duke Ellington, Thelonious Monk, Charles Mingus, and George Gershwin from a Pacific Rim perspective by mixing instruments of European and American vintage with those of various Asian cultures. Now, with the September 28 release of "India & Africa: A Tribute to John Coltrane" on Water Baby Records, the 16-member ensemble brings its unique multicultural vision to 12 compositions written by and/or associated with John Coltrane.

The Asian American Orchestra will headline the 33rd John Coltrane Memorial Concert at 7:30 pm on Saturday, 9/18, at Northeastern University's Blackman Theatre in Boston. Also at Northeastern, Brown will meet with students in the Asian American Center at 11:45 am on 9/15, and will participate in a symposium on and book-signing for "John Coltrane & Black America's Quest for Freedom: Spirituality and the Music" in the Amilcar Cabral Center at 6 pm on 9/16.

The band will return to Yoshi's in San Francisco at 8 pm on Wednesday, 9/29, to celebrate the release of the new CD; they had premiered "India & Africa" there on September 23, 2009, Coltrane's 83rd birthday. Brown also will be featured in a panel discussion on the book at 7:30 p.m. the following night, Thursday, 9/30, in the Fillmore Jazz Heritage Center's Media and Education Theater, which is adjacent to Yoshi's.

Posted by Arnaldo DeSouteiro at 7:07 AM