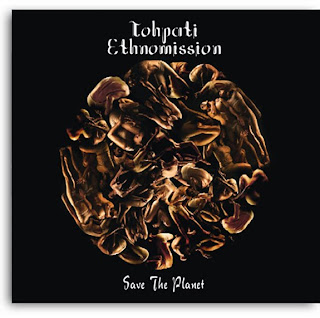 CD of the Week
Tohpati & Ethnomission: "Save The Planet" (MoonJune) 2010

Tohpati is one of the most famous guitar players in Indonesia, the fourthmost populous country in the world. He is known as solo and session artist and member of various jazz, fusion, pop and rock projects.

Composed, Arranged & Produced by Tohpati.
Recorded in Jakarta, Indonesia, in 2010.

To most global listeners, the words ‘Indonesian music’ bring to mind the intricate metallic rhythms of that nation’s venerable gamelan orchestral tradition, or the sinuous strains of female singers like Idjah Hadidjah who perform songs in the kliningan, celempungan, and jaipongan idioms. Ever since Claude Debussy famously became enchanted with Javanese gamelan music at the 1889 Paris Universal Exposition, Indonesian music has become synonymous in Western minds with an idealized and exotic East, a place of lush, timeless landscapes and sensuously swaying dancers.

But Indonesia has not remained frozen in time, and in this age of instant communication and rapidly collapsing cultural boundaries, Indonesian musicians have come to embrace the full spectrum of global musical offerings, at the same time enriching these adopted musical streams with their own unique sensibilities and suggesting new ways forward. A case in point is Indonesia’s surprisingly fertile jazz-rock fusion scene, whose prime movers include the remarkable MoonJune Records recording artists simakDIALOG, who update the electric keyboard–driven post-Miles continuum in strikingly original ways, in particular by substituting a traditional Indonesian percussion section for the customary trap set.

With his new MoonJune release "Save the Planet," simakDIALOG’s gifted guitarist Tohpati—in other contexts, one of the best-known and most highly regarded guitar players in all Indonesia—ventures out on his own with his crackshot unit Ethnomission. Bolstered by the highly simpatico team of bass guitarist Indro Hardjodikoro, percussionists Demas Narawangsa (just 16 years old at the time of this session) and Endang Ramdan (also of simakDIALOG), and suling (Indonesian wooden flute) player Diki Suwarjiki, and augmented by vocalist Lestari on the track “Bedhaya Ketawang,” Ethnomission serves up an exhilarating and wholly original program of instrumental compositions that set a new high-water mark for Indonesian fusion.

Possessed of a soulful, meaty tone suggestive of John Scofield, Tohpati spices up the proceedings through sparing and tasteful use of pitch shifter, ring modulator, delay, and MIDI guitar synthesizer, all the while retaining an emotive, organic quality. Bassist Indro Hardjodikoro proves every bit as dexterous as Tohpati in his solo on “Biarkan Burung Bernyanyi,” while the percussion tandem dazzles on “New Inspiration.” Highlights of "Save the Planet" include “Ethno Funk” and “Perang Tanding,” the two pieces that most explicitly channel Indonesian traditional music, with its fiendishly intricate stop/start rhythms.

With "Save the Planet," Tohpati serves notice that he is a force to be reckoned with on the world musical stage, and demonstrates that jazz-rock fusion is as vital and relevant as ever, with many fascinating musical mergers yet to be explored. Save the Planet is a most welcome remedy for a planet desperately in need of saving.
Posted by Arnaldo DeSouteiro at 2:41 PM

This is indeed a great album! The musical instruments used in all of the tracks blended perfectly. The good condition of the instruments as well as its accessories such as mandolin picks (for example) are keys in producing these wonderful songs.