"I hope you'll join us for our shows at the Culver City Radisson this Friday. I am thrilled to be a part of this weekly jazz series produced by Merle Kreibich," says Holland. With the demise of the Jazz Bakery, the Culver Club is the only jazz "listening room" on L.A.'s west side."Acclaimed jazz vocalist Sony Holland, who recently relocated to Los Angeles, will be performing at the Culver's Club for Jazz (aka Catalina Bar & Grill) this next Friday, January 29, backed by Theo Saunders (piano), Tony Austin (drums), Larry Koonse (guitar), and the legendary John B. Williams, who has worked with everyone on the jazz scene - from Louis Armstrong, Horace Silver and Dizzy Gillespie to Airto Moreira (on the fabulous "Identity" album), Jon Hendricks, Johnny Hammond and, most recently, Natalie Cole.

"I am new to LA, so it is really nice to get to know people on the local music scene, which
is FANTASTIC. The musicians and singers are so talented here," Holland says. Raised in Minnesota, she lived in Nashville during the '90s, moved to San Francisco six years ago (where she built a cult-following among Bay Area jazz fans), and now she is in Los Angeles.

About her bassist on this gig, the one and only John B. Williams, she states: "I have seen him play with Nancy Wilson several times as she is one of my favorite singers, so I'm excited to be working with him." Btw, Sony has been compared to Nancy as well as to June Christy and Peggy Lee. It's easy to notice an influence of Tony Benett too. "Sony Holland has a warm deep voice and a very clear tone. One can always understand the words she is singing yet she is not shy to improvise," the renowned jazz writer Scott Yanow once wrote.

"Repertoire for my show will be a wide mix. Like many singers I am including more contemporary songs into my show along with the standards," she tells us. "So along with songs by Harry Warren, Johnny Mercer and Duke Ellington, there will also be songs by Rufus Wainwright ("Sansoucci"), Bob Dylan ("All I Really Want to Do"), and even a jazz/reggae version of a song by Carla Bruni & William Yeats, "Those Dancing Days Are Gone." Also, I sing a few wonderful original songs written by my husband Jerry Holland (originally from New York City) though he has written a #1 Billboard Country song" ("Friends,” recorded by John Michael Montgomery.) Hope she will also include Hoagy Carmichael's "The Nearness of You" (the theme song of Arnaldo DeSouteiro's radio show at TUPI-FM during the 80s, in a recording by Roland Hanna) and Jobim's "Meditation" on the setlist. 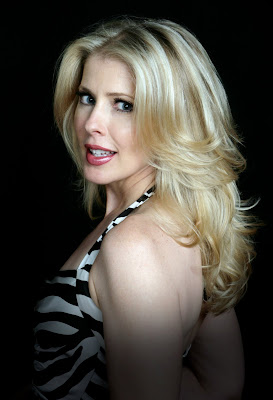 Posted by Arnaldo DeSouteiro at 2:35 AM