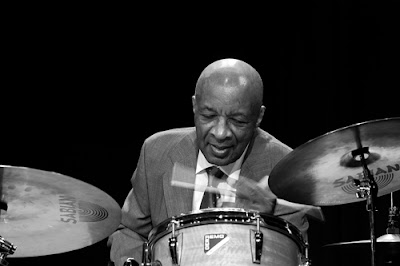 We are very sad to announce that Ed Thigpen has passed away on January 13th 2010.

A true legend and master musician has passed away. Ed Thigpen has contributed more than half a century of music to the world. As well as an entertainer, Ed was also a gifted educator in his field and a great human being.

The very first time I remember having heard Ed Thigpen, without knowing I was listening to him, was in 1973 (when I was 10 years old), on the JB-AM radio in my native Rio de Janeiro (Brazil). Simon Khoury, the radio DJ at that time, used to give a lot of airplay to Ed's song "Denise," a charming bossa nova recorded by Thigpen as a sideman on the album "Yesterday & Today" by Toots Thielemans (who whistled and played guitar in unison, one of his trademarks, on that specific track) and the underrated string multi-instrumentalist (fiddle, violin, viola, cello) from Denmark, Svend Asmussen. The Belgium Toots and the Danish Svend (known as "The Fiddling Viking") recorded that intriguing album in November 1972, backed by Ed Thigpen on drums & tambourine and Red Mitchell on bass, plus keyboardist Kjell Öhman and electric bassist Stefan Brolund. Despite the other good songs in the repertoire, Thigpen's "Denise", named after his daughter, is the album highlight.

Soon after I got many albums by the Oscar Peterson Trio, on which Ed was the drummer (with Ray Brown on bass, of course). Items like "Affinity," "We Get Requests," "Canadiana Suite" and "West Side Story" that were true lessons of jazz-brush drumming. Not to mention his work with Ella Fitzgerald, Benny Carter, Clark Terry, Milt Jackson, Monty Alexander and many others.

Oh, and I had the honor to meet him in person during the Nineteenth Annual IAJE (International Association of Jazz Educators) in Miami, in January 1992. While Arnaldo DeSouteiro was there to do a clinic ("Jazz and Brazilian Music: Interaction Along The History" and participate in the opening panel session about "Global Jazz Education," the Ed Thigpen Trio - with bassist Marlene Rosenberg and guitarist Tony Purrone - performed a wonderful concert at the Ashe Auditorium of the James L. Knight Center (of the Hyatt Regency Miami) the day before my main clinic.

Jazz drummer Ed Thigpen, who often was described as "Mr. Taste" for his sensitive accompaniment of instrumentalists and singers such as Ella Fitzgerald, Oscar Peterson, Bud Powell and Billy Taylor, died Wednesday at Hvidovre Hospital in Copenhagen. He was 79.

Thigpen, who suffered from Parkinson's disease, was hospitalized before Christmas with heart and lung problems. His son, Michel, noted on Thigpen's website that his father "passed away very peacefully... in the company of his friends and family."

In addition to the "Mr. Taste" label, Thigpen also was identified as a musician's drummer, a player who set a standard for blending subtle, propulsive swing with an adaptability that allowed him to function in a wide range of musical settings.

"Even though he seldom ever wanted to show all of the skills that he had -- which was a matter of his good taste and selectivity," said drummer and friend Ed Shaughnessy, "he had a great deal of ability on the drum set. He wasn't a dogmatic player. He could be as perfect as he was with Oscar Peterson, and then he could be completely different in another context."

Universally admired for the subtle range of timbres he extracted from his drum kit, Thigpen was especially adept with the use of brushes -- a technique that he believed had been largely abandoned by a younger generation of drummers.

"Since the emergence of rock, which for the most part has always required heavy drumming," he told Leonard Feather in The Times in 1986, "the brushes were set aside, or, for most of the young players who began during this period, have never been used at all. My father and many others -- Jo Jones, Art Blakey, Buddy Rich, Max Roach, Shelly Manne, Elvin Jones -- all had a great influence on my use of the brushes, which I still believe must remain an important part of any drummer's performance."

Born in Chicago on Dec. 28, 1930, Edmund Leonard Thigpen moved to St. Louis with his parents, Ben and Mary, while still an infant. When his parents separated, he was taken to Los Angeles by his mother, who died when he was a teenager.

After attending Jefferson High School -- an educational launching pad for such other well-known jazz artists as drummer Chico Hamilton, trumpeter Art Farmer and saxophonist Dexter Gordon -- he attended Los Angeles City College, then moved back to St. Louis with his father, a drummer with the Andy Kirk Orchestra. Working with Peanuts Whalum's Orchestra, he occasionally jammed with Miles Davis, a St. Louis native.

In 1951, Thigpen made the move to New York City that was vital for any ambitious young jazz player of the period. After performing with Cootie Williams' band, he was drafted into the Army, serving during the Korean War from 1951 to 1953.

Returning to New York, Thigpen soon established himself as one of the up-and-coming jazz drummers. His ability to play a creative supportive role made him the drummer of choice in a wide range of musical settings.

In the mid-'50s, his performances and recordings reached from singer Dinah Washington, saxophonists Johnny Hodges and Paul Quinichette to such cutting-edge artists as Lennie Tristano and Gil Melle.

From 1959 to 1966, he joined with bassist Ray Brown as the rhythm team for Oscar Peterson, forming one of the classic jazz trios, recording dozens of albums with the high powered pianist.

"When you're in a band like Oscar Peterson's," said drummer Bobby Colomby, "it's as much supporting as it is getting out of the way, which, for a drummer, is quite a talent. And Thigpen added something that was perfect for the context of that situation, and for whatever music he was playing."

After his relocation to Copenhagen in 1972, Thigpen became the drummer of choice for touring American jazz artists while balancing his performance schedule with an active career as an educator and clinician.

Teaching in the conservatories of Copenhagen and other European cities, he sometimes included seminars at U.S. universities during his occasional American tours. Articulate and soft-spoken, he was an imaginative teacher whose insights enlightened his student musicians with a mixture of practical advice and metaphoric insights.

"The role of a drummer," he told Mike Zwerin in the International Herald Tribune in 2000, "is like that of a chariot driver who 'has to hold all those horses in rein. Your ears have to be open to everybody.' "

Thigpen supported his quest for a revival of brush technique with the instruction book, "The Sound of Brushes." He also wrote extensively about other aspects of jazz drumming in the books "Talking Drums," "Rhythm Analysis and Basic Coordination" and "Rhythm Brought to Life."

In addition to his dozens of recorded performances with other artists, his own albums include "Out of the Storm," "The Element of Swing," "It's Entertainment" and "Mr. Taste."