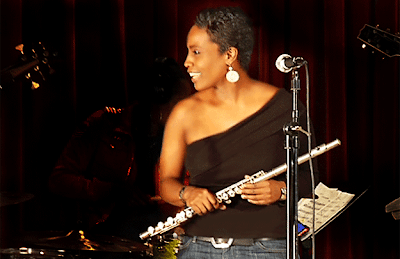 Help us welcome flautist Claudia Hayden on Tuesday, January 12 at Jazz Tuesdays in the John Birks Gillespie Auditorium in the New York City Bahá'í Center at 53 East 11th Street (between University Place & Broadway. There will be two shows at 8:00 and 9:30 p.m.

Composer and flutist Claudia Hayden has got a sound which is funky, sassy and smooth as silk! Her band, aptly named ‘The Hayden Project’ has taken audiences to heights which have them standing on their feet with applause at venues around the country.

Claudia’s talents were honed while studying with the renowned Alvin Batiste and flautist Kent Jordan and also, while performing with other amazing talents like Joe Sample, Marc Cary, Roy Hargrove just to name a few!

True to her New Orleans roots, Ms. Hayden has developed a musical style that is velvety yet, energetic; while her tone has a hypnotic, almost vocal quality. Taking cues from World Music while serving up some fiery licks from Jazz and Funk, ‘The Hayden Project’ soars with body rockin’ classics and soul stirring original songs penned by Claudia herself.

While it’s easy to find reviews and critical acclaim of her dynamic sound and performance style in Essence, Times Picayune-New Orleans and TimeOut NY; Claudia herself sums it up best when she says: “…the music I share with my audience is spontaneous and as smooth as water but, with an earthy edge as real as life…my life.”

Most recently, Claudia, a composer and publisher member of ASCAP; took out time to write and produce music for not one, but two CDs to be released in 2010 – the enigmatically titled “Abstract” (a Contemporary Jazz offering) and “The Spirit Speaks” (a cohesive collection of Native American Flute/Meditative music). Eet with applause at venues around the country.