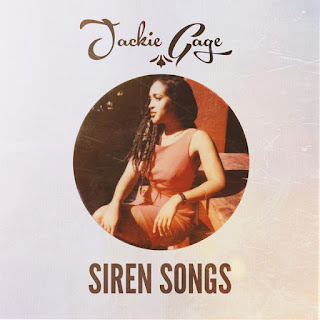 "Siren Songs," a beautiful debut from singer Jackie Gage (what a gorgeous voice!), places classic torch songs alongside sultry originals. The theme interweaves the story of unrequited love within the music. And with original pieces like “It’s Your Love”—a marimba-driven song apprehensively dreaming for the affection of a significant other—to “Mine”, a tale of the woman pushing the boundaries of love, adorned by a string section that also appears on "Serves Me Right" and "Sweet," the latter with a hip-hop vibe. Gage sets the stage for the modern-day siren. The tremendously talented singer, gifted with a warm & velvety voice, also gives new life to the jazz classic "Afro Blue" (turning upside down the famous tune by master conguero Mongo Santamaria, almost unrecognizable) and the standard "That Old Black Magic" (Harold Arlen-Johnny Mercer).

Channeling torch singers of decades past, the San Jose native marks her arrival with a refined blend of sultry originals alongside newly arranged classic songs that showcases her dynamic range with hints of R&B, soul and jazz.

Based on the concept on the ancient idea of a siren, the womanly figure who lures desperate sailors into treacherous waters, “Siren Songs” takes listeners on an emotive journey of love and loss, and passion and intrigue over the course of nine songs that range from pining love stories to haunting ballads. In her native San Jose, Gage was the self-described “designated torch singer” adding, “that identity fueled this debut.”

Gage, who recently relocated to New York City, has firmly made her mark in her home state with annual tours from Sacramento to San Diego. As a 2014 Jazz Search West finalist, she was awarded performances at nationally recognized venues Yoshi’s Oakland, the Freight and Salvage in Berkeley and the Sound Room in Oakland. In addition, she has performed at the Fillmore Jazz Festival, San Jose Summer Fest and Berkeley Juneteeth, among others.
Posted by Arnaldo DeSouteiro at 10:38 PM