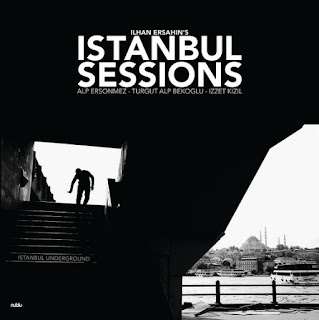 Confusion is good sometimes. It’s a way to start thinking about whatever you are confused about. This is what Ilhan Ersahin’s Istanbul Sessions have done since 2008. They have set fire to stages all across the world: from New York to Istanbul, from Paris to Sao Paolo, from London to Skopje. Their electrifying, genre-crossing performance pose questions: Is this really jazz? Doesn’t this sound like a rock band? Where does their sound come from?

Frontman Ilhan Ersahin, a great tenor sax player, is one of those rare moguls of the New York City underground scene via his club and record label, Nublu, and he’s spread his New York energy throughout the world. It’s possible to see him jamming with The Red Hot Chili Peppers in Sao Paolo, or featuring Bugge Wesseltoft in Blue Note Tokyo or playing a beautiful oriental set with Turkish gypsies in an elegant concert hall somewhere in Europe.

How about Istanbul Sessions then? It’s master-level musicianship meeting high eclecticism where the cliché of “east-to-west crossover” finds its true sense and power. A session is a meeting of a deliberative body to conduct its business. In this case, the business is music, and the music is another heavyweight offering from Ilhan and his crew: Alp Ersönmez on bass, Turgut Alp Bekoğlu on drums, and İzzet Kızıl on percussion.

Above all, the Istanbul Sessions can aptly be described as cinematic. Ersahin’s saxophone sounds like it could have been recorded in the Alps or in the sweeping sand dunes and oasis’s of the Middle East. On “Falling,” Ersahin’s tone is practically three-dimensional... double tracked and bathed in a healthy dose of reverb, the saxophone and rhythm of the band evoke a story-like narrative from the mad-man trills strewn throughout the track, to the soaring, almost stadium anthem chorus. Clearly, it’s all about the (s)axe, and Ilhan Ersahin is your axeman.

History has a tendency to repeat itself, and for the third time ‘round, East meets West once again with the results more satisfying than previously thought imaginable. Through Ersahin’s playing, you can hear the ghostly echoes of those passed and a clear call to the future in his frenzy. You can also hear the siren’s call, the brooding beauty of the shrouded mystery that is the desert. Devilishly hot and bothered, the dry night air caresses your face, stirring a primal urge that excites as you step out into the glow of the Turkish metropolis.
Posted by Arnaldo DeSouteiro at 8:32 PM