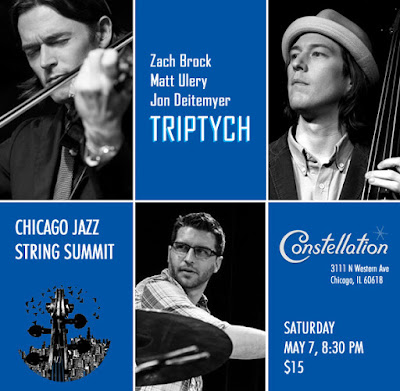 Another strong recommendation for May 7, this time if you live in the Chicago area:
Triptych, featuring Zach Brock, Matt Ulery and Jon Deitemyer will perform at the Chicago Jazz String Summit next Saturday at 8:30 PM at Constellation, located at 3111 Western Ave, Chicago IL 60618. Tickets are available at www.constellation-chicago.com. Also performing that evening will be Trio Amgydala and James Sanders' Proyecto Libre.

About Zach:
"I called the great French violinist Jean-Luc Ponty and I said 'So, who's the new cat? Who's got the stuff? And he said Zach Brock." --Stanley Clarke

Heralded as "the pre-eminent improvising violinist of his generation," Zach Brock is an award-winning jazz violinist and composer whose music draws on the traditions of jazz, classical, world, and popular music. The Chicago Tribune recognized Zach's latest recording "Perpetuity" as one of it's "top ten jazz recordings of 2014" and Downbeat Magazine's 61st Annual Critics Poll named Zach it's "Rising Star" Violinist of 2013.

Zach Brock also has been included in the Jazz Station Polls since 2012. He was elected Best Violin Player of the Year in 2014, for the "Purple Sounds" (Criss Cross) album, and placed second in 2015, behind only Jean-Luc Ponty in the 37th Annual Jazz Station Awards, for his wonderful CD "Serendipity," also on the Criss Cross label.
http://jazzstation-oblogdearnaldodesouteiros.blogspot.com.br/2015/12/the-best-jazz-of-2015.html
https://www.facebook.com/zachbrockmusic/posts/10152716734218074

Zach's acclaim as a bandleader has grown through appearances at venues such as Carnegie Hall in New York City and festivals like "Tudo é Jazz" in Ouro Preto, Brazil, while his reputation as a sideman has spread through collaborations with legendary bassist Stanley Clarke, Grammy-award-winning super-group Snarky Puppy, and contemporary jazz masters Phil Markowitz and Dave Liebman.

In 2012 Zach became the first violinist ever to record for Criss Cross Records in it's 32-year history and 2016 will see a new release for the acclaimed Dutch label. In addition to touring and recording, Zach has represented the U.S. Department of State as a Musical Ambassador in the Solomon Islands, has been a featured soloist for two Sundance Festival feature film scores, and is currently "Artist In Residence" at Temple University's Boyer College of Music and Dance in Philadelphia, PA.

About Matt:
"This is music of brisk intelligence and an almost off-putting abundance of composure... with frictionless access to great chunks of classical post-minimalism, atmospheric indie-rock and harmonically astute post-bop."--New York Times

Chicago-based bassist/composer and bandleader Matt Ulery has developed an instantly recognizable sound. Known for his sweeping lyricism, unconventional phrase structures, expressionistic emotionalism, Ulery's music is informed by the entire spectrum of jazz, classical, rock, pop, and folk- specifically American, South American, Balkan, and other European folk styles. He performs not only on upright and electric bass, but doubles on tuba. Ulery has produced and released 6 albums of all original music under his name including his three most recent releases of critical acclaim, "By a Little Light," "Wake an Echo," and "In the Ivory," on Dave Douglas's Greenleaf Music record label in 2012-2014.

Ulery has played in bands with Kurt Rosenwinkel, Phil Markowitz, Jimmy Chamberlin, Fareed Haque, Howard Levy, Patricia Barber, Goran Ivanovic, Jeff Parker and many others. As a composer, Ulery has collaborated with ensembles such as eighth blackbird and the New Millennium Orchestra of Chicago. When not touring parts of the U.S. and Europe, Matt appears regularly in the Chicago area music venues and has performed with his groups at prestigious venues such as Carnegie Hall, Chicago Orchestra Hall, Millennium Park Pritzker Pavillion, Chicago Cultural Center, The Krannert Center, Blues Alley, Jazz Showcase, The Metro and countless other fine music listening rooms.

About Jon:
"Jon Deitemyer is the drummer everybody wants right now..." --Patricia Barber

Mr. Deitemyer's performances have taken him all over the United States, as well as South Korea, Brazil, Poland, Germany, Lithuania, the Czech Republic, and Canada. Recordings of his drumming can be heard on the Concord, Greenleaf, Origin, and MaxJazz labels. He is also an active educator, with teaching positions at Loyola University Chicago and the Chicago Academy for the Arts.
************
The Chicago Jazz String Summit
Held over the course of three days (May 6, 7, and 8), The Chicago Jazz String Summit highlights the achievements of accomplished string players locally, nationally and internationally who make bold statements in jazz, improvised and creative music today. Players who are pushing the boundaries, stretching traditions and increasing possibilities particularly on viola, cello and violin. The Summit serves to foster community amongst improvising string players and to encourage and inspire a new generation of improvising stringed musicians.
Posted by Arnaldo DeSouteiro at 10:25 PM