Fewell grew up in Philadelphia. At the age of eleven he learned to play guitar and in 1967 began to perform as a professional musician in his hometown. In 1972 he went on a tour of the Middle East. After his return to the United States, he studied jazz guitar with Lenny Breau and Pat Martino at the Berklee College of Music. Upon his graduation in 1977 Fewell joined the guitar department at Berklee where he taught for 38 years and authored two active textbooks on jazz guitar:  Jazz Improvisation for Guitar - A Melodic Approach, and Jazz Improvisation for Guitar - A Harmonic Approach. He also wrote for music magazines such as Guitar Player, Guitar Club, Chitarre and Axe.

In 1988, he joined the academic exchange program in Rotterdam, working with Cees Slinger, and played at the North Sea Jazz Festival in a duo with pianist Dave Frank. In 1989 he moved to Paris, taught at the American School of Modern Music, and performed in ja zz clubs in the city. On a tour of Italy, he performed at the Umbria Jazz Festival in Perugia.

Fewell worked in duo with pianist Alex Ulanowsky on a teaching program in jazz theory and improvisation. They also played concerts and held workshops in Holland, Belgium, Italy and Austria. In 1991 he received a grant from the National Endowment for the Arts and taught at the Jazz & Rock School in Freiburg and taught counterpoint and the music of Johann Sebastian Bach and Charlie Parker at the conservatories of Leipzig and Weimar. In 1992 he taught in Cologne and Aachen and also played with David Friesen on the Zelt-Musik-Festival in Freiburg.

In 1993, Fewell was joined by Fred Hersch, Cecil McBee and Matt Wilson on his debut album (Accurate) A Blue Deeper Than the Blue  and subsequently recorded as leader on Reflections of a Clear Moon (Accurate) in l997, Birdland Sessions (Koch) in 2000, City of Dreams (Splasc(h)), and Red Door Number 11 (Splasc(h)) in 2003. In 2009 he founded the Variable Density Sound Orchestra and recorded two albums on his own Creative Nation Music label, in 2009 and on Sound Particles 47 in 2013. He has worked with Achille Succi, Roy Campbell, Jim McNeely, George Cables, Steve Laspina and Billy Hart.

From 1994 to 1999 Fewell held summer courses in Warsaw at the invitation of the Polish Jazz Society and played with Polish artists at the Solo / Duo / Trio Festival in Krakow. In 1995 in Hungary he collaborated with pianist Laszlo Gardony and appeared at the Tatabanya Jazz Festival with Dusko Goykovich and Zbigniew Namyslowski. He also held joint summer courses and appeared at Copenhagen's Jazzhus Montmartre . At the invitation of the International Association for Jazz Education (IAJE)  Fewell taught with Bill Dobbins in the late 1990s and founded a conference of the European IAJE in Maastricht. From 1995 to 1999 he held jazz workshops at the Montreux Jazz Festival , where he performed with his trio. In 1996 he toured with Tal Farlow on Musikmeesse in Frankfurt am Main.

Around 2000 he turned to more improvised music, joining John Tchicai on their 2005 S oul Note recording Big Chief Dreaming.  A trio with Tchicai and Charlie Kohlhase followed in 2006, producing the live recording Goodnight Songs (Boxholder).  As a co-leader, his subsequent recordings include The Lady of Khartoum with Eric Hofbauer in 2008 (CNM), John Tchicai's Five Points in 2009 (NuBop), Estuaries with Steve Swell in 2013 (dEn), and Tribal Ghost also in 2013 (No Business).

In recent years Fewell divided his time between teaching at Berklee, holding private concerts at his home, playing at clubs in the U.S., and an extensive playing and teaching schedule from his home in Bergamo, Italy.  The last and perhaps most significant project was the 2014 publication of his book Outside Music, Inside Voices: Dialogues on Improvisation and the Spirit of Creative Music, a series of interviews with John Tchicai, Han Benninck, Dave Burrell, Joe McPhee, Matthew Shipp, Roy Campbell, Irene Schweitzer, Milford Graves, Henry Grimes, William Parker, Oliver Lake, Henry Threadgill, and many others. He also recorded a fantastic duo album with Italian singer Boris Savoldelli, "Electric Bat Conspiracy."

Fewell is survived by his wife, Emy, and son, Alex. 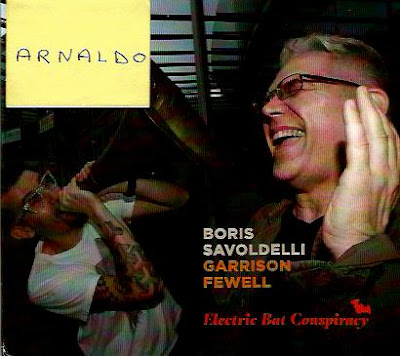 Posted by Arnaldo DeSouteiro at 8:36 PM