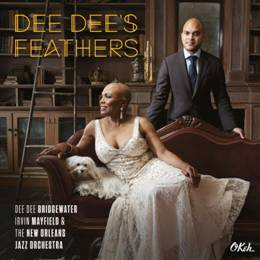 “It is the underlying story of triumph that makes me most proud of this work.  The waters of Katrina took so much from so many in New Orleans…We can only see this project as a tangible example of rebirth and healing and love, through the art of Jazz.  Love is the greatest story ever told, and this collaboration proves there’s much to be had in New Orleans, and shared with everyone, everywhere.”  - Soledad O’Brien, CNN Anchor/Journalist

Dee Dee’s Feathers, a journey through the history of New Orleans as told through song and the collaboration of Dee Dee Bridgewater, Irvin Mayfield & The New Orleans Jazz Orchestra (NOJO), is set for release August 7th, 2015, via OKeh/Sony Music/DDB Records. Recorded at New Orleans’ Esplanade Studios, a studio in a reconverted historical church in the heart of the city that was badly damaged by Hurricane Katrina, the release of Dee Dee’s Feathers will be accompanied by tour dates worldwide including stops at The New Orleans Jazz & Heritage Festival, North Sea Jazz Festival, Montreal Jazz Festival, the Barbican in London and New York City’s famed Apollo Theatre on Halloween.

“It was at the groundbreaking ceremony of the future site of the Jazz Market where I had the idea of a collaborative recording,” said Bridgewater.  “I thought that Irvin Mayfield, NOJO, and I needed a musical 'calling card' so to speak, a product that epitomized the joys of our accumulative collaborations. When I shared the idea with Irvin, the seed was planted. After several emails, Irvin's song suggestions, song keys picked out over the phone, we found ourselves at Esplanade Studio exactly one month later. Under Irvin Mayfield's skillful leadership, band members had done the arrangements, and over the course of three days we recorded, filmed, bonded, and laughed our way through the most extraordinary recording experience I've had. The music turned out so good, with my dear friend Dr. John blessing us on a day's notice, Bill Summers’ magical percussive layers, and a host of well- known NOLA characters.   I knew Irvin and his band mates had bathed me, immersed me, baptized me in the waters of the Mississippi, and exposed me to the roots of New Orleans.  For me this album is a celebration of life itself.”

Added Mayfield, “This album is a testament to the continued relevance of New Orleans not only as a thriving city but also as a muse for communicating truth, love and beauty. Dee Dee Bridgewater leads us through a new artistic moment while answering a mandate created over a century ago by Jazz geniuses like Buddy Bolden, Jelly Roll Morton, Sidney Bechet and Louis Armstrong.  She proves through her art that New Orleans is not just a city but more importantly an idea that can make your heart and soul feel better.”

Although steeped in history, Dee Dee’s Feathers is at the same time a modern exploration of the music and culture that makes New Orleans a city and place unlike any other.   Traditional songs such as “Big Chief” (featuring guest artist Dr. John), “Saint James Infirmary” and “What A Wonderful World” – all songs indicative to and steeped in the culture of the Big Easy – co-mingle with new compositions such as “Congo Square” and “C’est Ici Que Je T’aime,” transporting the listener on a sensory voyage through the city, whether dancing in a Second Line or frequenting a storied bordello in the heart of the city’s French Quarter.

The launch of the album and tour will also be tied-into the opening of NOJO’s New Orleans Jazz Market later in 2015.  The first solely-dedicated space for Jazz and Education in New Orleans, Bridgewater will serve on the Board of Directors for the facility and has made a commitment to furthering music and education in the city in tandem with the facility.

Also being released in tandem with Dee Dee’s Feathers is Mayfield’s new book, New Orleans Jazz Playhouse, a 304-page coffee table book that includes seven CDs of live music recorded at his Bourbon Street Jazz club, Irvin Mayfield’s Jazz Playhouse. The book reflects on Irvin’s unique experiences as a New Orleans native, a Jazz musician, and the many influences in his life including countless musicians, artists, photographers, chefs, teachers, and other mentors.

Unifying and grounding the various stories, poems, and essays are two central concepts that permeate the book: jazz & love. Illustrating Mayfield’s  well-crafted words is a collection of some of the most culturally significant photography and artwork by master craftspeople such as John Scott, Gordon Parks, George Rodrigue, Herman Leonard, Greg Miles, and Erika Goldring, and the book features an introduction by biographer Walter Isaacson, a foreword by novelist Ernest Gaines, and an afterword by trumpeter and jazz-master Wynton Marsalis.
Posted by Arnaldo DeSouteiro at 10:08 AM