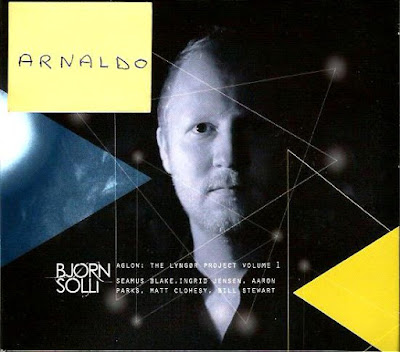 A top-class guitarist whose warm tone evokes something like "Jim Hall meets Pat Metheny," Solli leads a fantastic group in this perfect album of intriguing original tunes. The opening track, "Windjammer," is a killer post-bop theme, also featuring Seamus Blake on the tenor sax. Ingrid Jensen enters the scene on the third track, the blues "To The Lighthouse," and keeps shinning on the epic ballad "Calenture," the outstanding "Battle of Lyngor" and the lovely ballad "A Dog Named Fanny." The rhythm section is equally impressive, playing in a cohesive and fiery way throughout the album, one of the most interesting and appealing jazz releases of the year.

It all started in 2007 when Bjørn Solli went to visit a friend on an island in the south of Norway. The group of islands is known as Lyngør and the place had a profound effect on the Norwegian guitarist/composer.  Initially it was the sheer beauty of the place that struck him, but he was soon equally enamored with the people.  Solli quickly made many friends on the archipelago and started having annual concerts there, bringing with him musicians from New York, Shanghai and Rome to play on the pier every August. Out of this grew the Lyngør Jazz Club and in 2012 they commisioned Solli to compose music inspired by Lyngør and to record an album. Over the next 15 months, Solli spent frequent retreats on the island and was given an opportunity to assemble a band of amazing musicians.

He had been touring and recording with several of the band members for years and was very familiar with each musician’s sound. Knowing each band member’s unique approach and strengths, allowed Solli to compose specifically for each musician. By giving the band freedom to interpret the music as they wished everyone brought a fresh perspective to the material and made wonderful contributions to the shaping of the tunes. This album is a perfect representation of Bjørn Solli – the musician and the composer – and is his most personal effort to date. It has great variety and offers plenty of swing, contemplative ballads, singable waltzes, South American rhythms, gritty blues and more; all held together by Solli’s acute sense of melody, evocative harmony and passion for groove.

Musician Bios:
Bjørn Solli – guitar – One of Norway’s foremost jazz guitarist for the last 10 years – 5 of those years he spent in New York working with some of the world’s best musicians. He has received numerous awards and has toured around the world in places such as China, Australia, India, Nepal, Vietnam, South-Africa, USA, Russia and most of Europe. Solli has released 4 albums with his organ trio SOLID!, the latest of which features Seamus Blake. www.bjornsolli.no

Seamus Blake – tenor & soprano saxophones – The New York based tenor saxophonist/composer is recognized as one of the finest exponents of contemporary jazz. His music is known for its sophistication, bold improvisations and “sheer swagger”. John Scofield, who hired Seamus for his “Quiet Band,” called him “extraordinary, a total saxophonist.” He was also the winner of the 2002 Thelonious Monk Competition and has released 6 albums on Criss Cross as a leader. www.seamusblake.com

Ingrid Jensen – trumpet (3, 4, 8 & 9) – Ever since her debut recording in 1995, Jensen has been one of the most original voices in jazz trumpet. She has had a busy career leading her own bands and has been nominated for several Juno Awards. Jensen has been a member of the Maria Schneider Jazz Orchestra and performs with an array of top players such as Gary Bartz, Terri Lyne Carrington, Billy Hart, Victor Lewis and Billy Taylor. ) www.ingridjensen.com

Aaron Parks – piano – One of the most gifted and unique pianists on the scene today. Since becoming a member of Terrence Blanchard’s band in his teens, Parks has released his own albums on Blue Note and ECM and toured and recorded with Kurt Rosenwinkel, Joshua Redman and many others. www.aaronparks.com

Matt Clohesy – bass – Born in Australia, Clohesy has been living in New York since 2001 and is one of the city’s busiest and most accomplished bassists. He is a long time member of Seamus Blake’s band and Darcy James Argue’s Secret Society, and has played with such notable bandleaders as Geoffrey Keezer, Kurt Rosenwinkel and Maria Schneider. www.mattclohesy.com

Bill Stewart – drums – Stewart has been one of the most important drummers in jazz for over 25 years. His fantastic musicianship and original concept combined with an amazing groove has led to steady gigs with the likes of Michael Brecker, Joe Lovano, Pat Metheny, John Scofield and a 25-year association with the Larry Goldings Trio.
Posted by Arnaldo DeSouteiro at 8:49 PM