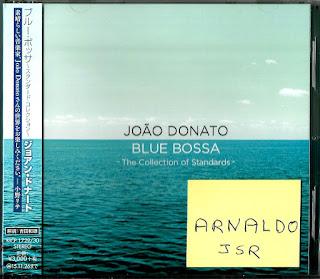 The album title may suggest a project of jazz and/or GAS standards, but this 2-CD set with 27 tracks also includes overdone bossa classics ("Desafinado," "Wave," "Girl From Ipanema," "A Felicidade," "Corcovado") and Donato's striking originals "Minha Saudade," "Amazonas," "Emoriô," "A Paz," "No Coreto," and "Vento No Canavial."

However, as I expected, the best moments come from the title's promise: Kenny Dorham's Blue Note jazz standard "Blue Bossa," several GAS classics recorded by Sinatra ("Fly Me To The Moon," "But Not For Me," "'S Wonderful") and some odd choices ("Besame Mucho," "Smile") that, surprisingly, work well in this mixing pot.

The highlights are two songs that Donato has always loved ("Tenderly," "Tea For Two"), a piano solo rendition of "The Shadow Of Your Smile" (wish there were other solo tracks!) used to close the album, and specially a delightful version of "How High The Moon" featuring the great interplay between Donato's acoustic piano and Ricardo Ponte's flute; both perform exquisite solos, with Donato starting his statement with a quote of Deodato's "Estrelinha" that he had recorded in 1976 for the never released "Prossiga" album.
Posted by Arnaldo DeSouteiro at 8:51 PM