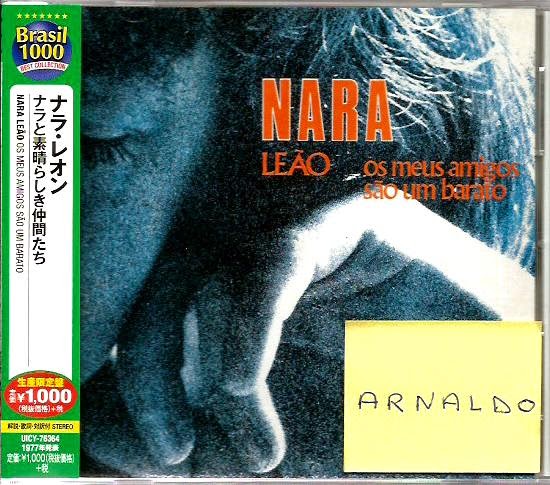 Reissued last month (on June 11, 2014) only in the Japanese market (where else? and by the second time, btw), this remain my personal favorite Nara album ever. Back in 1977, when I was still a teenager in my native Brazil, I got my first vinyl copy because João Donato was involved on the sessions. Actually, not only he duets with Nara on his own "Amazonas" -- the first version with lyrics added by his hugely talented brother, Lysias Enio, who, btw, is the best lyricist that ever worked with Donato, the one who understands his music better than any of the other great lyricists that have worked with him -- as well as Donato plays in most of the tracks (all recorded at the old Phonogram in an 8-track console!), adding his unique piano touch to such nice tracks as Caetano Veloso's "Odara" and Erasmo Carlos' "Meu Ego".

I also never heard a more gentle Dominguinhos' tune than "Chegando de Mansinho," on which he appears on accordion. The same instrument is used by the late genius Sivuca on "João & Maria," the first and last partnership between he and Chico Buarque, who shares the vocals with Nara (actually, Chico added the lyrics to a melody composed by Sivuca thirty years earlier...) and on Edu Lobo's surprising Norhern folk-like song "Repente," on which Gilberto Gil plays triangle, joining Djalma Correa on percussion. Gil was on the studio because he wrote (and recorded on) the opening song, "Sarará Miolo," that was done specially for this project and later covered by Flora Purim on his "Carry On" album for Warner.

Carlos Lyra appears on "Cara Bonita," a Portuguese version for "That's So Obvious That I Love You," originally recorded on Sergio Mendes' "Home Cooking" with English lyrics by Kate Lyra. Roberto Menescal and Ronaldo Boscoli contributed a new song, the soft bossa "Flash Back." And the album producer, Roberto Santana, introduced a (by then) new composer, Nelson Rufino, who duets with Nara on the lovely "Nonó". But nothing haunts me most than the final track, "Fotografia," on which Nara is joined only by Antonio Carlos Jobim's piano & vocals.

I love this album so much that I've selected three of its tracks in a 5-CD compilation series I've produced in Europe for Universal, "A Trip To Brazil," during the 2000's. "Fotografia" appears on volume 1, "Odara" on volume 2, and "Sarará Miolo" on the third. Essential listening.
Posted by Arnaldo DeSouteiro at 10:43 PM