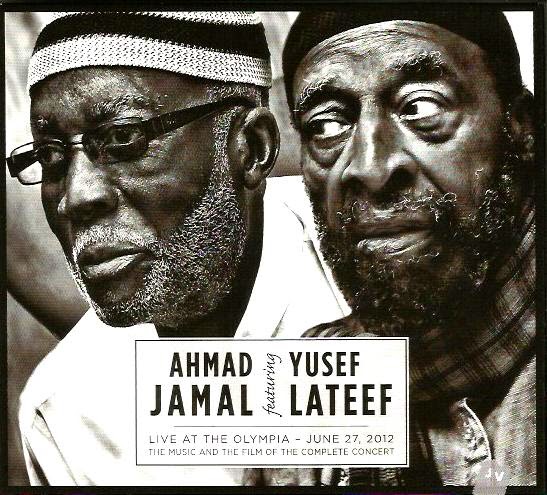 CD/DVD Set of the Month
Ahmad Jamal & Yusef Lateef: "Live At The Olympia: The Music And The Film Of The Complete Concert" (Jazzbook Records/Jazz Village)

This wondrous 3-disc set (2 CDs + 1 DVD) is coming out today in Europe, distributed by Harmonia Mundi. Leading his fabulous quartet -- which consists of Reginald Veal (acoustic bass), Herlin Riley (the drummer who replaced Idris Muhammad on the group after the legendary musician decided to retire) and former Weather Report member Manolo Badrena (congas, bongos, percussion, vocal effects) --, pianist Ahmad Jamal delivers another masterpiece to his fans. As a very very special guest, my dear late friend Yusef Lateef, who passed away in December 2013 at age 93.

On CD 1, Ahmad plays originals ("Autumn Rain," "The Gypsy, "I Remember Italy") and rebuilds such standards as "Invitation," "Blue Moon" and "Laura." CD 2 includes the four astonishing tracks with Yusef Lateef (in fact, Jamal doesn't plays on "Exatogi," performed by Yusef and the band), plus two encores: a reprise of "Blue Moon" and Jamal's biggest hit ever, "Poinciana." The DVD brings together the 14 tracks of the CDs, i.e., the complete concert! Total Time: 3 hours and 30 minutes.

Olympia, Paris, 27 June 2012. In this mythical concert hall, the Ahmad Jamal Quartet played in telepathic mode to reinvent the repertoire of Jamal's studio album "Blue Moon." Then, before giving the audience a transformed rendering of "Poinciana," a big hit from the Chess era, the pianist brought on stage Yusef Lateef who played with him in the glory days of the Atlantic label. The pioneering world fusion redman then conjured up some magical moments (on four tracks, "Exatogy," "Masara," "Brother Hold Your Light" and Cannonball Adderley's "Trouble in Mind" sung by Lateef in a haunting performance) and took us on one of those mystical journeys to which he has the key. The result is a standing ovation, of course. This sublime recording offers the entire historic concert, illuminated by these two jazz greats inspired by groove and the spirit of the sacred. 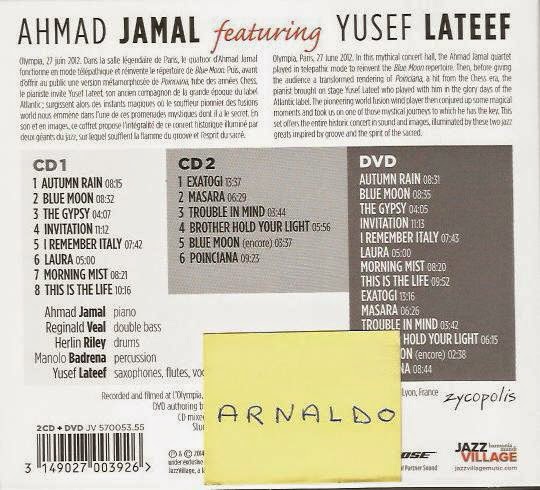 Posted by Arnaldo DeSouteiro at 11:36 PM