Instrumental Jazz CD of the Month - "Mark Egan: About Now" 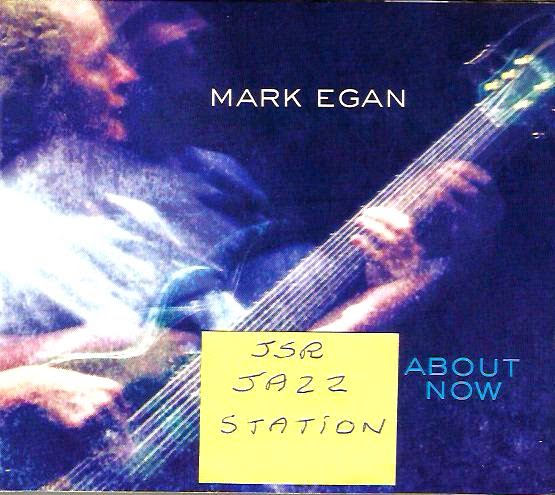 Contemporary jazz bassist and composer Mark Egan has released his seventh recording as a leader on Wavetone Records in a dynamic trio setting featuring two long time friends: master drummer Danny Gottlieb (with whom he played in the first incarnation of the Pat Metheny Group that originated "American Garage," and later in the band Elements) and brilliant keyboardist Mitch Forman, famous for his collaborations with John McLaughlin and Wayne Shorter, among others.

While Mark is best known for his work with Metheny, Sting, Gil Evans' Monday Night Orchestra, Joan Osborne, Larry Coryell and Pat Martino, this recording features Mark’s powerful yet eloquent solo playing as well as his special ability to support and provide creative interplay for the trio.

Mark's fretless bass grooves & sings throughout the CD, in perfect and dynamic interplay with Gottlieb and Forman. The nine stellar original instrumental jazz compositions contain that rare combination of master musicianship and creative soloing from some of the most influential contemporary improvising musicians. Mark belongs to a brilliant generation of bassists, which includes such masters as Will Lee, Alphonso Johnson, Anthony Jackson, and of course the late Gary King and Jaco Pastorius. I've been a huge fan of Egan since I bought a copy of David Matthews' "Dune" LP back in 1977, still in my native Brazil. Three years later I saw him playing live for the first time, as a member of the Pat Metheny Group, when they took the "American Garage" Tour to the Rio/Monterey Jazz Festival in August 1980.

Later on, I attended many of his gigs with the Gil Evans Orchestra @ Sweet Basil in NYC, and also had the chance to talk more with him when Creed Taylor invited me, in October 1990, to the rehearsals that the CTI Superband project was doing for the "Chroma" tour in Japan. When I returned to New York in April 1991, Mark was playing every Monday night @ Zanzibar, with an all-star combo led by the late Joe Beck, and also featuring other dear friends of mine such as Gottlieb, Lew Soloff and Ronnie Cuber. For two months, I went there each and every Monday night. More recently, we met in the CTI All Stars concerts in 2009 and 2010. The man never stops to amaze me and all the wise souls of the universe.

*********
Over the past 30 years, Mark Egan’s ability to groove, perfectly complement the music in any situation and solo expressively has made him one of the most in-demand bass players on the international music scene. While racking up credits with the likes of the Pat Metheny Group, saxophonists Steve Grossman, Dave Liebman, Stan Getz, Sonny Fortune and Bill Evans, vocalist Michael Franks, guitarists Pat Martino, Larry Coryell, John McLaughlin, Alex de Grassi, John Abercrombie, Chuck Loeb and Vic Juris, the Duran Duran off-shoot group Arcadia, the Gil Evans Orchestra as well as pop stars Sting, Joan Osborne, Sophie B. Hawkins, Marc Cohn and Roger Daltry, Egan also went about documenting his singular fretless bass guitar voice in a series of recordings as a leader beginning with his 1985 bass manifesto, "Mosaic."

Following on the heels of 2010’s "Truth Be Told" (his quartet recording with saxophonist Bill Evans, keyboardist Mitch Forman and drummer Vinnie Colaiuta) and 2013’s trio offering "Unit 1" (with guitarist John Hart and drummer Karl Latham), Egan reconnects with his Pat Metheny Group/Elements band mate, drummer Danny Gottlieb, and keyboardist Forman for an invigorating program that highlights the bassist’s signature singing fretless 5-string tones in both funk and impressionistic settings. The 20th album on his own Wavetone label, "About Now" is a stunning trio outing that has Forman alternating between piano and Fender Rhodes and the telepathic rhythm tandem of Egan and Gottlieb holding down the fort while also contributing potent solos and highly interactive playing throughout.

“I wanted to do an intimate trio project that used both electric and acoustic piano with both groove and open playing that would feature the interplay between us,” says Egan in describing the highly interactive nature of this trio project. “So there’s a few open and impressionistic compositions, and others that are groove tunes that allow us all to really experiment. This recording features my fretless playing in an intimate trio setting in a different way than any of my other recordings.”

The title track, which has Gottlieb underscoring on brushes, features the trio playing at a interactive dynamic while Egan sings away on the 5-string fretless. “On this album I wanted to feature the sound of the 5-string fretless Pedulla bass. On some of the melodies I also overdubbed with the 8-string fretless, as on ‘Sailing,’ using harmonics on my double-neck. It’s been a while since I’ve recorded with the double-neck and it felt great to be playing it again.”

Egan calls the "About Now" session an exposed open trio feel, which prevails on the groove-oriented “Slinky,” and carries a dark Miles Davis kind of “Tutu” vibe. “Graceful Branch” is a seductive ballad with singing fretless lines while “Little Pagoda” is cast in the vein of Hermeto Pascoal’s “Little Church” (which appears on Miles Davis’ "Live-Evil" 2-LP set). “Danny is playing double time on the cymbals and Mitch and I are playing a free tone poem. I wanted to create a trance like vibe on this song and was picturing a pagoda somewhere in Bali with a drummer playing a hypnotic cymbal rhythm and musicians playing a meditative tone poem around it. Essentially, it’s a free ballad that Mitchel embellishes with his beautiful statements.”

“McKenzie Portage” is a groove-oriented number that Egan wrote about the fishing expeditions that he’s made in the remote sections of Ontario, Canada with saxophonist Bill Evans. “My first expedition was in 1989,” says the bassist, “and it was the most fantastic and rigorous trip that I had ever made in my life. We had to portage for 30 miles with full packs and canoes en route to a pristine and virgin lake where we eventually had amazing fishing. I always wanted to name a tune after that adventure and this song describes the impressions from that trip 25 years ago.”

Elsewhere on "About Now," Egan has based the composition “Tea in Tiananmen Square,” on a tour he made to China with the George Gruntz concert band in 2000. His tune “Cabarete” is named for a town in the Dominican Republic that has become identified as an international wind surfing capitol. “We played a New Year’s concert there with Elements and the Latin tune ‘Cabarete seemed to fit the feeling.” “Puerto Plata,” named for a town near Cabarete, where the airport is located, and is a companion piece that closes out the collection.

Born in Brockton, Massachusetts on January 14, 1951, Egan began his musical studies on trumpet at the age of 10, mainly through the influence of his father who was an avid player in the Navy Band. He continued to play the trumpet through high school in jazz bands, R&B groups and the high school orchestra before picking up the electric bass at age 16. Mark subsequently enrolled at the University of Miami School of Music, under the direction of Jerry Coker, and studied privately with the late, great Jaco Pastorius, whose influence remains with him to this day. “When I heard Jaco play it made me aware of what could be done on the electric bass,” says Egan. “Jaco was an innovator and to be in his presence was uplifting and inspiring during those early years.”

While in Florida, Mark formed a band with fellow University of Miami students Clifford Carter (keyboards), Hiram Bullock (guitar), Billy Bowker (drums) and Phyllis Hyman (vocals). They came to New York in 1976 and soon afterward Egan hooked up with the Pointer Sisters, Deodato and David Sanborn before joining Pat Metheny in 1977 along with drummer Danny Gottlieb and Lyle Mays. Together they recorded the influential Metheny albums "Pat Metheny Group" (1978) and "American Garage" (1980). It was through this association that Mark would later team up with Gottlieb to form the band Elements, an uncompromising, genre-bending group that has 10 recordings to date and has toured in over 27 countries. “This is a reunion of the spirits to get back together with Danny and Mitchel and record some fresh music,” says Egan.

These days, Danny Gottlieb lives in Nashville and teaches at the University of Florida at Jacksonville. Keyboardist Mitchel Forman is currently living in Los Angeles. And Egan lives in New Canaan, Connecticut, where this recording was made in his home studio that was recently designed by Francis Manzella from FM Design. “This is the first recording from the new studio, Electric Fields, and it’s been a real labor of love,” says Mark. “Sonically, it has a master quality control room. The drum room has great acoustics and the main studio room has a gorgeous Steinway B from 1920 that was recently rebuilt. We also have a fine collection of vintage studio electronics and microphones. I feel that this studio design and recording was ‘mission accomplished.’ I love recording in the fine studios in New York City as well as having the luxury and creativity of being at home.”

Egan intends to use Electric Fields studio for a follow up recording by his Unit 1 trio and also another recording with his longstanding colleagues Gottlieb and Forman. Until then, enjoy their appealing and versatile chemistry on "About Now."
Posted by Arnaldo DeSouteiro at 10:51 PM