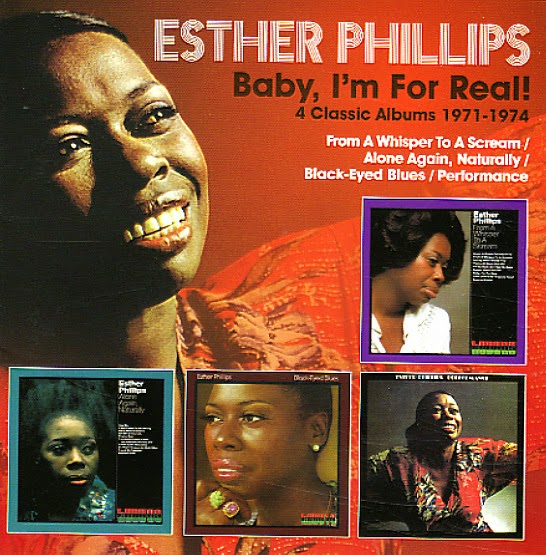 A huge chapter in the career of Esther Phillips (1935-1984). Four albums for CTI's subsidiary Kudu label, all recorded at Rudy Van Gelder's studio in Englewood Cliffs, NJ. First up is "From A Whisper To A Scream" – her debut under the guidance of producer Creed Taylor, recorded in December 1971 –, an album that really helped her transform her sound for the 70s! The approach is a lot more jazzy than before – served up with a good dose of funk, thanks to arrangements from Alfred "Pee Wee" Ellis (fresh from his work with James Brown) with the help of Jack Wilson (rhythm arrangements on three tracks) and Don Sebesky (additional strings).

Titles include an incredible cover of Gil Scott Heron's "Home Is Where The Hatred Is" with amazing horn riffs and two wah-wah guitars, plus Allen Toussaint's title track "From A Whisper To A Scream", Eddie Floyd's "That's All Right With Me" (presented as a lush ballad), Marvin Gaye/Anna Gay's "Baby, I'm For Real" (Sebesky's strings loop on the intro is pure lust) and Janis W. Tyrone's "Scarred Knees," the algum highlight, thanks to a fabulous vocal improvisation, with Airto playing tambourine in a gospel-blues mood. Richard Tee (organ & piano), Gordon Edwards (electric bass), Bernard Purdie (drums), Eric Gale & Cornell Dupree (guitars) complete the rhythm section, with Hank Crawford on alto sax, Frank Vicari on tenor, and David Liebman doing a rare appearance on baritone.

"Alone Again," her second date for Creed, recorded from July to October 1972, is one of the deepest soul sets from Esther Phillips' 70s years on Kudu; a set with some nicely gritty grooves and a surprisingly earthy feel at times. Backings are once again by Pee Wee Ellis, with additional strings charts by Sebesky, and although there's some of the usual Kudu electric funk in the mix, there's also some deeper soul elements too – a vibe that's often a bit laidback and open, almost more Atlantic Records at points – which is a mighty good fit for Esther's wonderful voice. The dream-team includes many guys featured on the previous album (Tee, Dupree, Gale, Crawford, Edwards, Purdie) plus Ron Carter, Billy Cobham, George Benson, Maceo Parker and Cecil Payne.

The album's got a great version of Bill Withers' "Use Me" that features fantastic tasty breaks, and a song revisited by Jamie Cullum in the recent CTI All Stars' "Live at Montreux 2009" released on CD, DVD and Blu-ray. Other titles include a nice version of Gilbert O'Sulivan's monster pop hit "Alone Again (Naturally)", plus the cuts "Do Right Woman, Do Right Man," "You and Me Together," and my personal favorites: Big Joe Turner's sexy blues "Cherry Red" (there's an even better version with the CTI All-Stars on "CTI Summer Jazz At Hollywood Bowl - Vol. Three"), Bill Withers' "Let Me In Your Life" done as lush ballad with Rhodes, electric bass and harp, in opposite to Aretha Franklin's frenetic cover, and a real masterpiece, the gentle racial manifesto "Georgia Rose" in a stunning acoustic rendition with Richard Wyands, Ron Carter, Billy Cobham using only brushes, and a spoken intro created by Gil Scott-Heron.

"Black Eyed Blues" (from July 1973) is next, and Creed Taylor gave Esther a nice little dose of funk that really helped her groove – getting out of the sad bag of her Atlantic recordings, and sounding hipper than anyone would have expected. Once again, Creed called Pee Wee Ellis to do the rhythm & brass section charts, selected a Bill Withers tune ("Justified") as the opener, but replaced Sebesky for Bob James to provide the strings arrangements, and invited many musicians outside from the jazz circles, like King Crimsom members Boz Burrell on electric bass, Ian Wallace on drums and British rock keyboardist Tim Hinkley.

The record features Joe Cocker's great slow funk groover "Black Eyed Blues," famous for Charlie Brown's guitar riffs – and other tracks include a beautiful take on Carolyn Plummer's "I've Only Known A Stranger" and Leonard Feather's blues "You Could Have Had Me, Baby." Still, I consider it Esther's less interesting Kudu date. However, Duke Ellington's jazz classic "I Got It Bad And That Ain't Good" is a complete disaster, despite the presence of Ron Carter.

"Performance," cut in May 1974, has a nicely dark undercurrent at times – a sound that's not as smooth as some of Esther's other Kudu albums from the 70s, with bits of R&B bubbling underneath the more contemporary arrangements. Backings are penned by Pee Wee Ellis, Don Sebesky (strings on Dr. John's "Such A Night" that features Richard Tee's peculiar groove on a tack piano!) and the late bassist Gary King, who scored Eugene McDaniels' classic funky number "Disposable Society" – one of those great little groovers that never did anything for Esther at the time of its release, but which has really gotten rediscovered in the acid jazz/hip hop years thanks to Steve Gadd's killer drum-breaks and Michael Brecker's outrageous tenor solo.

The box includes bonus tracks "Brother Brother," "I Can Stand The Rain" and a single radio edit of the title track from "What A Difference A Day Makes" (1975), her fifth album for Kudu; that song became Esther's biggest hit ever, a track that exploded in the airwaves and in the dancefloors, making her a "disco diva." For "What A Diff'rence..." Creed had paired Esther with guitarist & arranger Joe Beck, and they repeated the collaboration on "For All We Know" (1976), which I had the blessing to produce CD reissues in Japan (in 2001 and 2007). Her last project for Kudu was "Capricorn Princess" (1977), arranged by David Matthews and featuring cameos by Allan Holdsworth, John Blair and Barry Miles. After leaving CTI/Kudu, she did four albums for Mercury, a single for Winning and a final album - once again arranged by David Matthews - for Muse in 1984 (but only issued in '86, two years after her death.)

No one has ever described Esther's vocal persona better than music historian and journalist A. Scott Galloway. On his liner notes essay for the first CD reissue of "Alone Again, Naturally" (released in 2008 by the UK label Reel Music), he wrote: "The voice of Esther Phillips is like a saxophone in a section unto itself, blowing blues from a raging diaphragm, funneled through a smoky head and a vinegary throat that socks it to your solar plexus. Whether you called this one-of-a-kind instrument an 'Esther-phone' or a 'Philli-phone," the diminutive yet cobra-coiled horn would be distinguished as sounding like one had knocked back a shot of citrus and cayenne, then chased it with a balm of honey butter, lending it the seductive resonance of a late night DJ or a lover over the phone on a hot-n-bothered night." Amen.
Posted by Arnaldo DeSouteiro at 10:51 PM