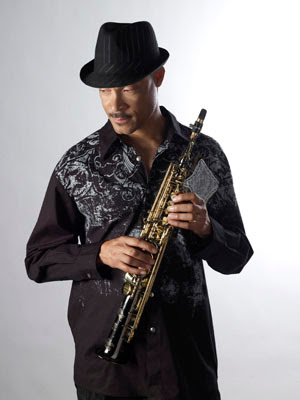 Saxophonist and composer Tom Braxton's latest release, "Endless Highway," takes you on the ride of your life. Joined by an impressive array of instrumentalists and vocalists, this recording is a toe-tapping, colorful, groove-oriented excursion with a sophisticated urban flavor that will make you feel like dancing and singing all day long. "Endless Highway," his second release on the San Diego-based Pacific Coast Jazz label, lifts Braxton to a new level of artistry as he pays homage to his friend and mentor, professional basketball player and bass guitarist, Wayman Tisdale, who recently lost his battle with cancer. Wayman was recently inducted into the Oklahoma Jazz Hall of Fame and Tom will be performing at the October 21st Gala in honor of the occasion. The highly anticipated new recording is scheduled for national release on October 6, 2009. To hear audio clips, visit Tom Braxton's website at: http://www.TomBraxton.com

"We're excited to have the opportunity to represent Tom Braxton's most impressive CD to date," says Donna Nichols, founder and president of Pacific Coast Jazz. "This new disc highlights Braxton as a composer, producer and arranger along with six of his original compositions that feature his effortless transition from soprano, alto and tenor saxophones to showcasing his versatility on piano, keyboards and flute." Nichols' label has teamed up with publicist Joy Foster of SV Media Relations and radio promoter Cliff Gorov at All That Jazz for access to international media buying and radio promotion.

Braxton has shared the stage with such artists as George Duke, Kirk Whalum, Jonathan Butler, Jeff Golub, Marcus Miller and Luther Vandross along with opening concerts for Norman Brown, Boney James, Dave Brubeck, Cab Calloway, David Benoit and The Crusaders. He has been featured in CBS's The Saturday Early Show, BET's Jazz Central, CNN, NBC's Inside Stuff and many others. Without a doubt, "Endless Highway" will drive Tom Braxton to the top of the charts while we take a trip with his inspiring tunes at home or on the road. So get ready to pack your bags, roll down the windows and crank up the volume in the "Braxton tradition." "Creating music that brings people joy is my mission in life," says Tom. Looks like he has accomplished his mission on "Endless Highway."

Fri., Oct. 30 - Grambling, LA
Alumni Hall of Fame Induction Banquet
Grambling State University
Assembly Center
5:30 p.m.
Tom Braxton understands his purpose on earth is to create music that touches our hearts. That's why Jazz Review calls Braxton, "...one of smooth jazz's most prolific saxophonists...with all the required tools to become a major force." A seasoned performer, who knows how to charm audiences of all ages, Braxton has his own distinctive and recognizable sound which incorporates elements of Jazz, Latin, Funk and R&B and leaves listeners spellbound, filled with a sense of joy as his music swirls through your soul.

But jazz didn't always come easy growing up in the dusty plains of Lubbock, Texas where it all began for Tom Braxton. As unlikely an environment as it was for a boy to dream of being a jazz musician, Tom fortunately had a direct link to this creative art form through his dad, James ("J.T.") Braxton. "I have to credit my dad with connecting me to jazz at an early age. He introduced me to all the jazz legends: Lester Young, Miles, Coltrane, Charlie Parker, Stitt, Getz, Ben Webster, Coleman Hawkins and many more. He would share how he had heard Count Basie and Duke's original bands and the great Ella Fitzgerald. He put the alto sax in my hands in the 6th grade, after I had been playing piano for two years. At the age of 90, my dad still plays his tenor sax and violin everyday, and he's still gigging!" After graduating valedictorian from high school, Tom attended Texas Tech University on track and music scholarships. "I love to run, and the 200, 400 and 1600-meter relay were my best events." This fact explains his driving energy and stamina on stage today.

During his college years, Braxton formed the jazz-fusion band "No Compromise" which toured the southwest and opened concerts for Joe Sample, Stanley Clarke, George Howard and many others. The band performed many of Tom's original compositions, which helped to fine-tune his writing style. Tom decided to launch his solo career after graduating summa cum laude with a Bachelor of Music/Performance degree. His first act of business was to join forces with keyboardist and producer Bernard Wright to release his solo debut album, "Your Move." "The highlight of my first release was having the opportunity to record a duet with long-time friend Kirk Whalum on the song 'Peacemaker.'" Bernard Wright not only produced Braxton's first CD, but also was instrumental in connecting him to a gifted musician/producer who would elevate Tom to the national touring circuit, Wayman Tisdale. "I have to credit Bernard Wright with getting me the gig with Wayman. I flew to Sacramento and played with Wayman where we opened a concert for the Yellowjackets. I'll never forget it . . . it was 1992!! Except for a few years off when my sons were born, I became a regular part of Wayman's group." Wayman Tisdale was quoted saying, "When I'm on the road, Tom is the saxophonist I want to have with me. I love that sweet sound he gets on the horn."

Braxton's solo career continued with his second album, "Katallasso," that mixed memorable, easy funk melodies with some unique production touches. In April 1998, the CD was released internationally on Positive Music Records and featured the talents of Kirk Whalum, Paul Jackson Jr., Bill Maxwell and Bill Cantos. The next two albums took a brief departure from mainstream smooth jazz by connecting with Tom's spiritual side. In 1999, he released an instrumental praise and worship CD entitled "Face to Face" followed two years later with the release of a Christmas album, "Comfort and Joy," that presented Braxton's fresh arrangements of traditional and contemporary holiday favorites. His friend and mentor, Wayman Tisdale, produced his fifth release, "Bounce," for Dave Koz's label, Rendezvous Entertainment. "I remember Wayman approached me with the idea of doing a recording together," said Braxton. "I was very excited about the project and the creative juices began to flow. We had a lot of fun in the studio playing with grooves and melodies and as a result the CD, 'Bounce,' was born."

In 2007, Tom added a new CD to his discography, "Imagine This," on the Pacific Coast Jazz label. "The album kicks off with one of my favorite songs, 'Peg,' by Steely Dan which is a band I've always admired. I wanted to cover that song for years and I when I finally got the opportunity, I was thrilled to include the unique vocal work of Kevin Whalum." SmoothJazz.com wrote, "(Tom Braxton)... absolutely blows me away with his album 'Imagine This.' I'm imagining that this will be the big breakout release for a career that is really kicking into high gear."

In 2009, on the heels of finishing his next Pacific Coast Jazz label CD release, shocking news hit Braxton when Wayman Tisdale lost his battle with cancer. "Wayman was a gifted musician and a great friend that I will always miss. I stood on his right side for over seventeen years and it was my goal to make him sound great every night. Through the years, I became good at blending my sound with his, a valued skill I learned while in his band. Wayman's passing is a reminder of our mortality and it has made me even more determined to live my life to fulfill the purpose God has for me."

Tom's latest project, "Endless Highway," highlights Braxton as a composer, producer and arranger along with six of his original compositions that feature his effortless transition from soprano, alto and tenor saxophones to showcasing his versatility on piano, keyboards and flute. Bursting with exhilarating grooves and sizzling hot horn arrangements, "Endless Highway" manages to lift Braxton to a new level of artistry and is a testament to the many challenges Tom has faced along his highway of life. He hopes it will help others as they continue down their own road. "We are all on this road of life, moving at our own pace, experiencing the smooth places where you can relax and the rough roads that can challenge and discourage you. But we must never forget how important it is to enjoy the ride!"
Posted by Arnaldo DeSouteiro at 6:54 AM

It was a really huge pleasure to meet you and your wonderful band last night at the San Angelo Museum of Fine Arts. I was excited to talk to you and Joseph during the interval and it was a special time, just the 3 of us. I loved the whole concert and it was so enthralling. You are all extremely talented and of top quality. I was mesmerised by you all and completely swept away. Wow you are truly multi talented. I am just so happy to know you all now. I hope to see you again soon. Come back to San Angelo :o)