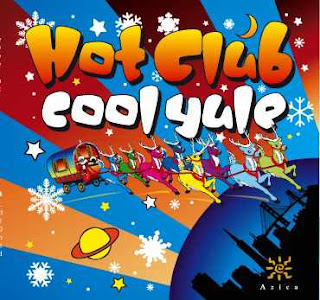 One of the best jazz Christmas albums to come along in many years. A perfect combination of unpredictable arrangements, gorgeous performances and lovely tunes, besides a great sonic quality. Highlights: "I'll Be Home for Christmas," "Sugar Rum Cherry," "I Wonder as I Wander" and "The Christmas Song."
*****
Django Reinhardt and Stephane Grappelli never recorded an album of holiday music, but the Hot Club of San Francisco -- who've long been inspired by those gypsy-jazz pioneers -- always wished they had. "What Would Django Do?," the Hot Club's guiding principle, led happily in this case to the creation of "Hot Club Cool Yule." It's the 12th album in the San Francisco quintet's 20-year career and their second for Azica Records, who'll release the CD today, October 27, in the USA.

"We'd been considering a holiday CD for years," says the group's founder and lead guitarist Paul Mehling, "but we didn't want to just throw one out there. Now, with the birth of [violinist] Evan [Price]'s daughter in August -- which was imminent during the entire production of this CD -- we felt more connected to childhood and the holiday spirit than ever. We're also at an all-time high with musicianship in the band now. After 20 years we've really got a dream team, so we had to go for it now."

With inventive arrangements by Price and Mehling, the quintet essays a range of material and moods from cheeky to tender to ecstatically swinging. Steve Allen's "Cool Yule," which was a hit for Louis Armstrong, leads off the proceedings; holiday standards ("I'll Be Home for Christmas," "Santa Claus Is Coming to Town," "Auld Lang Syne") are included along with vividly reimagined chestnuts (a habañera-style "Rudolph the Red-Nosed Reindeer" aka "Don Rodolfo," and a "twisted up" "Jingle Bells" dubbed "Djingle Bells"). The jazz waltz medley of "Carol of the Bells" and Vince Guaraldi's "Skating" is a particular highlight.

The Hot Club's previous Azica album, released in January of this year, was "Bohemian Maestro: Django Reinhardt and the Impressionists," which one reviewer described as a "light-filled celebration of the French-gypsy guitar genius Django Reinhardt, French Impressionism, and the kinship between music and painting." Strings magazine called it "one of the group's best. As usual, the HCSF forgoes flash in favor of soulful substance." And Stereophile praised the band's "lush forest of textures, often replicating the dynamics and sound of the Django-Grappelli partnership. . . . [Bohemian Maestro] is a consistent disc that has the feel of a set piece concert: all very well-done and, happily, very well recorded." The current edition of the Hot Club of San Francisco, heard on both "Bohemian Maestro" and "Cool Yule," has been together for six years, anchored by Paul Mehling and two-time Grammy-winning violinist Evan Price (a ten-year veteran of the Turtle Island String Quartet) and also including Jeff Magidson and Jason Vanderford on twin rhythm guitars and bassist Clint Baker.

Posted by Arnaldo DeSouteiro at 5:45 AM