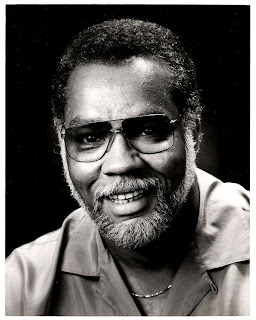 The first time I listened to Butch Cornell was on Stanley Turrentine's "Sugar", the saxophonist's legendary debut solo LP for CTI, recorded in November 1970 at Van Gelder Studios in New Jersey - and I'm sure that's how thousands of other jazz fans became acquainted with his talents. At that time, Cornell, who had moved earlier that year to NY, was a member of Turrentine's working band since September 1970, along with drummer Billy Kaye and guitarist Ray Prince (Cornell used pedals to play "the bass", so no bassist was needed...)
(Cornell, Kaye, Turrentine & Prince, 1970)

In his LP liner notes for "Sugar", my dear friend and top jazz historian Ira Gitler wrote: "Both organist Butch Cornell and drummer Billy Kaye are members of Turrentine's present combo. Cornell, Chattanooga born, was found by Stanley in Harrisburg, Pa. He was formerly with Willis Jackson. The particular clarity with which he articulates his lines is refreshing."
The original vinyl issue included three tracks: Turrentine's "Sugar" and Cornell's "Sunshine Alley" on Side A, and John Coltrane's "Impressions" on Side B, also featuring George Benson, Freddie Hubbard, Ron Carter, Lonnie L. Smith, Jr. and Richard "Pablo" Landrum, besides the aforementioned Cornell and Kaye. The cover art (by album designer Elton Robinson) features a controversial shot by photographer genius Pete Turner. "Back in the 1960s I had done a series for Look magazine called 'Black Is Beautiful.' The image on the cover of Sugar is an outtake from that shoot, of a mother licking a baby’s foot. Some people think it’s a sexual thing, but it’s not" Turner told to Marc Myers' excellent "JazzWax" blog last year. http://www.jazzwax.com/2008/04/pete-turner-c-1.html
(btw, that pic is included on Pete Turner's latest book, the superb "The Color of Jazz")

"If ever there were a record that both fit perfectly and stood outside the CTI Records' stable sound, it is Sugar by Stanley Turrentine. Butch Cornell's 'Sunshine Alley' is a solid, funky groover, paced by organ and double fours by Kaye. Turrentine and Hubbard stride into the melody and keep the vamp in the pocket, riding out past the blues line into a tag that just revs the thing up even further," jazz connoisseur Thom Jurek wrote in his review for the All Music Guide.

It's interesting to mention that, around the same time of the "Sugar" session for CTI, Butch Cornell also recorded "Sunshine Alley" when doing a sideman date (on November 23, 1970) for Boogaloo Joe Jones' "No Way!" album for Prestige.

At the time of the first CD reissue of "Sugar" in the USA market, in late 1987, reissue producer (and former CTI publicist) Didier Deutsch added a previously unreleased studio version of Hubbard's "Gibraltar", recorded in that same session. However, the many unreleased alternate takes of Butch Cornell's "Sunshine Alley" remained lost in the vaults, and were never included in any of the several subsequent CD reissues that came out in the USA, Europe and Japan. (For instance, in the 2002 CD reissue, also produced by Didier for Sony, he replaced "Gibraltar" for a live version of "Sugar" recorded during a CTI All-Stars concert at the Southgate Palace.)
Curiously, although having performed with Turrentine on live gigs for a decade, and despite the big critical and commercial sucess of "Sugar" (the LP reached the Billboard charts as #3 Jazz Album, #29 Black and #182 Pop Album!), Cornell was not invited by CTI's head Creed Taylor to take part of any of the Stanley albums that followed (with such keyboardists as Horace Parlan, Eumir Deodato, Richard Tee, Bob James, Harold Mabern and Herbie Hancock). Neither Turrentine invited him to the many other sessions he did after signing with Fantasy Records in 1974.

However, Cornell took part of some Stanley Turrentine's recordings for CTI which were never used on the "official LPs" ("actually they were what Creed used to call 'rehearsal sessions' because he was like testing musicians and tunes before coming up with the final concept for an album," Rudy Van Gelder explains). Some of those tracks eventually appeared in such compilations as "The Sugar Man" (a collection of out-takes released in 1975 including four tracks Cornell recorded in February and March 1971 alongside Ron Carter, Billy Cobham, George Benson, Kenny Burrell and Ray Barretto, with arrangements by Don Sebesky and Chico O'Farrill) and "The Best of Turrentine" (released by CBS in 1990 including two other previously unreleased tracks from the March 9, 1971 sessions). And, needless to say, the original 1970 version of "Sugar" has been included in dozens of compilations released all over the world. For additional details, please visit the definitive CTI website created by Douglas Payne: http://www.dougpayne.com/cti.htm
Bio: Butch Cornell was born in Chattanooga, Tennessee. He began his musical career at the age of 10, studying classical piano with Mrs. Lillian Cadek Dame of Cadek Conservatory. He credits his aunt Rinaldo Anderson for his earliest musical experiences. He began working with Charles Young (Saxophone) and the Pace Setters Band (which also featured Joe Burke on Drums and Joe Bennett on Bass) in and around the Chattanooga area at the age of 14. After graduating from Howard High School, Butch moved to Harrisburg, PA where he formed an Organ (Hammond B-3) Trio and worked several club dates and concerts on the east coast and in the mid-west. His first recording sessions were with Willis "Gator" Jackson and Boogaloo Joe Jones.

In 1970, Butch moved to New York City. During this time, Butch met and worked with several top-rated musicians and singers. He started his long association with Stanley Turrentine in September of 1970, and two months later he recorded the classic "Sugar" album for CTI, which included Cornell's own composition "Sunshine Alley." Since that time he worked with Freddie Hubbard, George Benson, Grover Washington Jr., Plas Johnson, Wilfred Middlebrooks, Arthur Prysock, Ernestine Anderson, Alice Day, George Coleman, Kenny Burrell, Woody Shaw, Billy Cobham, Johnny Lytle, and many lesser known artists. After returning to his native Chattanooga, Butch founded a jazz society called "Friends of Jazz, Inc." and became the organist of the Prospect Baptist Church. He died of kidney failure.
*********************
The obituary published at The Chattanoogan.com follows:
http://www.chattanoogan.com/articles/article_140473.asp

David C. "Butch Cornell" Randolph Jr., 67, of Chattanooga, died on Sunday, Dec. 7, 2008, at Parkridge East Hospital. Butch was of the Baptist faith and attended Prospect Baptist Church. Butch was also a renowned jazz musician and composer. Butch played both the organ and piano.

Your blog is fascinating.
I did not cover
"a mother licking a baby’s foot"
Alain

Hello, my name is Samira Randolph-Ali, I am Butch's youngest daughter. I love the article. I was really young or non-exsistant (lol) when his career was booming. So I never really knew alot of the History behind his music. If you don't mind I would like to speak with you further. I beleive you may have some information of value to me as I learn more of my dad's past. This is very important to me so if you can please contact me samirasings@yahoo.com. His talent traveled down to the baby so I really would like to learn more. Thanks