“..Just listening to the sheer energy, joy and overall mastery of For Dewey, makes one more than half-past ready for Peter’s re-entry in the new millennium. I’m willing to bet it is going to be a giant step.” - Ira Gitler

"I can’t remember hearing anyone of his age that well developed...plus that ear, that technique." - Gary Bartz 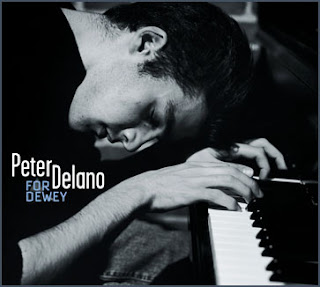 One of the original New York “young lions,” pianist Peter Delano, makes a welcome, much-anticipated return to his New York stomping grounds with a special appearance at the APAP Convention on Saturday, January 10th, 2008 at 4:20pm in the Harlem Suite of the Hilton Hotel, in celebration of the 1996 recording with Dewey Redman, just released on Sunnyside Records, "For Dewey." The first time I watched him was in 1994, on the LaserDisc "Carnegie Hall Salutes The Jazz Masters - Verve 50th Anniversary", later reissued on DVD in 2002, but only in Asia.

New York pianist Peter Delano thrived in the nineties….a leader of the pack, a photogenic child prodigy, an impossible teenage amalgam of McCoy Tyner’s chordal power, Bud Powell’s linear luminosity, and Keith Jarrett’s pianistic poetry. A student of Red Rodney’s pianist Gary Dial, Delano performed and recorded with the likes of Michael Brecker, Gary Bartz, and Lewis Nash, and burst on the scene with his self-titled 1993 Verve debut, at the age of seventeen, followed by his 1994 Polygram release "Bite of the Apple." He enrolled at Columbia University, but tragically, suffered a debilitating back injury that forced him to stop playing, until he resumed his career in 2007.

"For Dewey" - recorded in 1996 and released on Sunnyside for the first time ever – is a posthumous tribute to the late great tenor saxophonist Dewey Redman, with Danish drummer Anders Hentze and bassist Doug Weiss. As Ira Gitler wrote in his liner notes, “Peter continued to fulfill his great promise with his ‘94 release, "Bite of the Apple." What is now "For Dewey" was to be his third CD. It didn’t make it to the public because Peter began to matriculate at Columbia University. He wasn’t available to tour ‘in support’ (as they say) of his recordings and labels want their artists to be visible. For Dewey was yet another forward step. The originals reflect a still-growing Peter, as do his interpretations of the three standards. Redman is a presence on three of the five originals and there is magic in the interaction of the two principals.”

"For Dewey" represents for Peter Delano not only a return to the world of recorded music; it also marks the re-emergence of a shining star in a galaxy of jazz talents.
Posted by Arnaldo DeSouteiro at 3:32 PM