(Quincy, on center, with Herbie Hancock and Claude Nobs at the 2008 Montreux Jazz Festival last July)

Tomorrow, December 15, my friends & idols Dave Brubeck (who just turned 88 on December 6), Quincy Jones, Jack Nicholson and Jane Fonda, among others, will be inducted into the California Hall of Fame.

The induction ceremony will be hosted by California Governor Arnold Scharzenegger and First Lady Maria Shriver at the California Museum in Sacramento. Other 2008 inductees (whose achievements were described by "legendary" by the Governor) are Theodore Geisel (Dr. Suess), Robert Graham, Jack LaLanne, Dorthea Lange, Julia Morgan, Linus Pauling, Leland Stanford and Alice Waters.
Maria Shriver created the California Hall of Fame, which is sponsored this year by Chevron Corp. and Accenture.
***********
A big article on Quincy appeared on page N - 38 of today's issue of the San Francisco Chronicle daily newspaper.
It can also been read on line through this link:
http://www.sfgate.com/cgi-bin/article.cgi?f=/c/a/2008/12/12/PKOM14IRFM.DTL&type=books

There doesn't seem to be a big enough pie for Quincy Jones to get all his fingers in. Even the Earth itself falls short of his grasp.

"You know that tune I arranged for Count Basie and Sinatra, 'Fly Me to the Moon'?" Jones asks. "It went up to the moon with the astronauts in 1969, and Buzz Aldrin played it when they landed on the moon." Jones, 75, is speaking over the phone from his mansion in Bel Air.

Correct that: not just in Bel Air. "All the way at the top of Bel Air."

Yes, it can be revealed that Quincy Delightt Jones Jr. has an ego. That comes with the territory when you reach his level of accomplishment. The dude has so many citations - 27 Grammys (the most ever), scores of Oscar nominations and Golden Globes, dozens of awards for worldwide humanitarian efforts and a few handfuls of honorary university degrees - that he makes a joke about the one he's picking up Monday for his induction into the California Hall of Fame, an honor he's sharing with Jane Fonda, Jack LaLanne, Jack Nicholson, Dave Brubeck and several others.

"I'm going up to Sacramento to pick it up from Ahhhhnold," he says.

On Tuesday, Jones talks at Herbst Theatre for City Arts & Lectures, part of a tour he's on to promote his new book, "The Complete Quincy Jones: My Journey & Passions." Unsurprising for a Jones project, the book is unique. It has to be one of the most lavishly produced volumes of photos and memorabilia ever published, containing high-quality reproductions of items like Jones' report card from Schillinger House of Music (which became the Berklee School of Music); pages from Jones' appointment calendar from 1955, when he was leading a big band (with handwritten notes like "call Hamp" and "call Bags" and "Dentist"); ledger pages indicating what he, as a producer, was paying musicians ($240 to Ray Charles in 1959 for recording "Deed I Do" and "Let the Good Times Roll"); and the original scribbled-on sheet music for the Jones-produced "We Are the World." You can actually remove these items from their special pockets in the book.

At Herbst, interviewer Ben Fong-Torres - who is reportedly writing a biography of Jones - will have his work cut out for him, because Jones' talking style is strictly stream of consciousness, and mile-a-minute at that. An anecdote about his boyhood in Chicago can lead to a story about Miles Davis, which can segue into Jones' ideas about artificial intelligence, leading him to talk about the French Huguenots and the ghettos of Brazil. And so on.

In that spirit, we will provide a few chronological signposts, then just let Jones rip.

-- Born in Chicago: "My daddy (Quincy Jones Sr.) was a carpenter who worked for gangsters. You can't believe what it was like in Chicago then. It was the biggest ghetto in America, and this was the Depression. All I ever saw was tommy guns, stogies, dead bodies in the streets. When I was 10 years old, I got my hand impaled on a fence. ... I'd probably be dead if we had stayed in Chicago."

-- The family moves to Bremerton, Wash., when Jones is 10. He starts playing piano, then trombone and finally trumpet. Two years later, the family moves to Seattle, and Jones starts doing professional gigs, including with Ray Charles.

"He was two years older than me, and I wanted to be him. He was so independent; he had his own apartment. He came from Florida. He hated Florida. ... He said, 'When I get $600, I want to get as far away from Florida as I can get.' That was Seattle."

-- At 17, Jones joins vibist Lionel Hampton's band, where he starts doing arrangements. This leads to arranging for many others, including Dizzy Gillespie, Big Maybelle and Dinah Washington. Jones releases his first album, "This Is How I Feel About Jazz," in 1957. He moves to France and produces and arranges many albums for Barclay Disques while studying composition with Nadia Boulanger.

"One day I get a call from Grace Kelly in Monaco. She says, Mr. Sinatra wants me to bring 55 musicians to Monaco for a fundraiser. So I put together a band. I get onstage, and he was like a magician. Only about six words passed between us. I didn't even know if I was on his radar screen.

"Four years later, he calls me from Kauai. Says 'Q' - nobody ever called me 'Q' - 'I just heard the record you did with Basie, "Fly Me to the Moon." I like it in 4/4 the way you did it. Would you consider doing that with me and Basie?'

"I said, 'You gotta be kidding. ...' Two days later I was in Kauai. I got to know him. He had a little bungalow with a big picture of Jack Daniel's on the wall. ... People think Frank is this tough guy, but if you know him, he's really sweet and giving. You know, Frank and Buddy Rich got their personalities from Tommy Dorsey. Dorsey was a salty Irish alcoholic, and Frank and Buddy imitated him. ...

-- In 1961, Jones goes to work in the artist and repertoire department of Mercury Records. In 1964, he's promoted to vice president, becoming the first African American to hold a position that high in the record industry. He produces several hits for Lesley Gore, including the No. 1 "It's My Party," and goes on to produce and arrange hit records for dozens of artists, ranging from Louis Armstrong to Charles to Aretha Franklin to Little Richard to Paul Simon.

-- Jones composes his first film score in 1961, for Swedish film "The Boy in the Tree," and does his first score for a Hollywood film, "The Pawnbroker," in '64. This leads to dozens of scores, from "Walk Don't Run" to "The Hot Rock," and TV themes for "Ironside," "Sanford and Son" and the "Roots" miniseries.

"I knew it was going to be hard for a black guy to break into movies. ... When I was signed up to do 'In Cold Blood' in '68, Truman Capote did not want me to do that film. He said, 'I just don't understand why you want a colored man's music in a film with no Negroes.' At Universal, they didn't even have any black people in the kitchen then."

-- While Jones is serving as musical director and composer on "The Wiz" in 1978, star Michael Jackson asks if Jones will produce his solo album. Jones agrees, but at first Epic Records declines, saying he's too jazzy. But he produces "Off the Wall," then "Thriller," which becomes the biggest-selling album of all time, eclipsed since then only by the Eagles' greatest-hits disc.

-- Jones produces the song "We Are the World," written by Jackson and Lionel Richie, as a fundraiser for Ethiopian famine victims. Sung by the composers along with pop stars including Bob Dylan, James Ingram, Al Jarreau and Waylon Jennings, the song was a huge seller, raising more than $60 million.

-- Jackson accidentally facilitates Jones' move into full-fledged film producing. Jones was attempting to develop Alice Walker's novel "The Color Purple" into a film. He had already done the seemingly impossible, lining up Steven Spielberg, whom he befriended during the making of "E.T.," to direct the film, budgeted at $14 million. Spielberg agreed to work for scale. Then the film had to be cast.

"I was in Chicago testifying for Michael Jackson in a plagiarism case. I was in the hotel watching news on the TV and saw this reporter, and something made me think she could act. I asked around and they said her name was Oprah. I had never heard a name like that. Oprah spelled backward is Harpo, and we needed to cast Sophia, who was married to Harpo in 'The Color Purple.' It had to happen."

-- Not only did Jones launch the career of the one of the most successful female entertainers of all time, he did the same for the man who's the biggest star in Hollywood right now: Will Smith. Jones spotted his talent when Smith was rapper Fresh Prince and invited him to audition for the show Jones was producing, called "The Fresh Prince of Bel-Air."

"Will's figured it out. He's bigger than the movies. He's amazing." 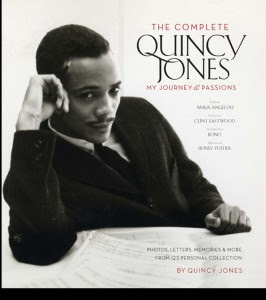