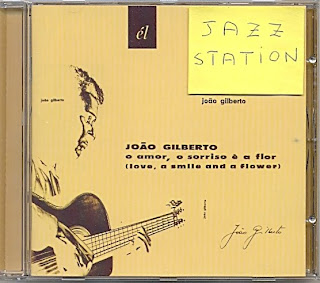 Album produced by Aloysio de Oliveira, originally credited as "musical director," and credited on this CD as "executive producer"
Arranged & conducted by Antonio Carlos Jobim (credited on the CD as "producer"), who also wrote the original liner notes, oddly deleted in this CD reissue
Cover photo: Francisco Pereira (uncredited on the CD)
Original album design: Cesar Gomes Villela (uncredited on the CD)
The 12-page booklet includes reproductions of covers of rare picture-sleeve singles released in France and Brazil, pics of Gilberto, Carlos Lyra, Alaide Costa, Silvia Telles and others, and extensive texts by Ruy Castro (taken from the book "Bossa Nova - The Story of the Brazilian Music That Seduced the World") and Caetano Veloso (taken from "Tropical Truth: A Story of Music and Revolution in Brazil")

In the summer of 1958, a singer-guitarist from Bahia in the north of Brazil called João Gilberto created a musical revolution when he joined with bossa novas seminal songwriting team, the gifted composer Antônio Carlos Jobim, and the poet and former diplomat, Vinicius de Moraes, to record the songs that would launch this cool, futuristic new music for a confident new era.
Bossa nova, "The New Way", was influenced by modern classical music (Villa-Lobos, Debussy), jazz and samba-canção. Gilberto brought an unprecedented guitar style and a hushed, understated form of vocal expression that defined the movement and changed the course of music history.

These albums are quite literally the aesthetic and musical blueprints for a genre that would exert an irresistible worldwide influence on popular music.

In 1962 Gilberto moved to the United States where he and Stan Getz recorded the million-selling Getz / Gilberto for Creed Taylor¹s Verve; an LP which featured a song (sung by João's then wife Astrud) that was to become one of the most popular of the twentieth century, the Jobim-Vinícius composition, La Garota de Ipanema (The Girl from Ipanema).

The reclusive João Gilberto is the "Great Master" of bossa nova; His art both enigmatic and timeless. He has worked with the Tropicalistas, Gilberto Gil and Caetano Veloso and influenced generations of arrangers, musicians and singers.
Posted by Arnaldo DeSouteiro at 8:47 AM