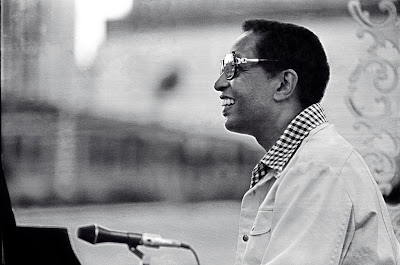 The recordings of Erroll Garner, a man inarticulate in speech and unable to read music, sold in millions across the world during the Forties and Fifties.

Billy Taylor was his contemporary (both men were born in 1921). Taylor ran a polished jazz trio that made many recordings which sold modestly and were probably underrated. Garner sold out concert halls across the world. Taylor was known little outside New York and good musicians in his trio seemed eventually to leave to move on to other things.

Garner's playing was piano anarchy. Taylor, on the other hand, provided an eloquent blending of the styles of various bebop pianists with that of Art Tatum, not so much the wellspring but the tsunami of modern jazz piano.

Taylor's intelligence and skills led him quickly into other fields and, although he remained an elegant jazz pianist, it was as a teacher and a communicator with the public that he achieved renown. He went on to become one of the great propagandists of jazz in his country.

None of his 350 or so compositions achieved the fame of his "I Wish I Knew How It Would Feel to Be Free". This was a basic 16-bar gospel-styled tune that became one of the flag-waving songs of the Civil Rights Movement during the Sixties, and achieved popularity on these shores as the theme tune to the BBC's Barry Norman-fronted film-review show.

His was a middle-class black family in Washington; his father was a dentist and his mother a teacher. Taylor's piano playing as a child was outstanding and he studied music at what was to become Virginia State University in Petersburg. He took up tenor saxophone, but the prowess of a fellow student, Frank Wess (a long-time star of the Count Basie band), overwhelmed him. Taylor abandoned the horn and concentrated on developing his talents as a piano player. In 1943 he moved to New York and became pianist with tenor saxophonist Ben Webster's group at the Three Deuces on 52nd Street, where he stayed for a considerable time. Dizzy Gillespie's Quintet across the street had the unreliable Bud Powell on piano, and when Powell failed to show up Gillespie took to using Taylor, eventually employing him for a time as pianist in his big band.

Taylor played at the National Exposition in Haiti in 1946, where he picked up an interest in the music of the area. This led to him playing with Machito and bringing Latin music into his own bands back in New York. In an extraordinary jazz quirk, the clarinettist Artie Shaw took over Taylor's quartet in the winter of 1950-51 and led it as Artie Shaw and His Gramercy Five -- the first of Shaw's Gramercy Fives had worked a decade earlier. It was symptomatic of Taylor's roles at the time that Shaw wanted to use him simply to provide a musical platform. Taylor's next job, in 1951, was to become house pianist at New York's Birdland club, where he worked as accompanist to bill-toppers like Lester Young, Charlie Parker, Gerry Mulligan and Dizzy Gillespie.

His parallel jazz career as educator and propagandist burgeoned in the Fifties. He began lecturing at music schools and in 1958 started as a disc jockey on a Harlem radio station with his own daily show. The same year he became musical director of a weekly NBC television programme, The Subject Is Jazz, and he contributed regularly for 20 years to CBS Sunday Morning.

During the Sixties Taylor moved to National Public Radio, where he worked for 20 years presenting Jazz Alive and later Billy Taylor's Jazz at the Kennedy Centre. He remained a broadcasting icon until his later years.

Taylor was instrumental in founding the Jazz Mobile in 1965. This presented free outdoor jazz concerts by eminent jazz musicians in the deprived black neighbourhoods of New York City.

Taylor was also the musical director of David Frost's talk show from 1969 to 1972. He taught jazz courses at Long Island University and at the Manhattan School of Music. In 1975 he gained a doctorate in music education at the University of Massachusetts and from then on preferred to be addressed as "Dr Taylor". Eventually he amassed 23 doctorate awards.

He gave up playing regularly in 2004, aged 83, when a minor stroke affected his right hand, but brought together his trio in performance as late as 2008. Taylor kept abreast of technology and had his own website. The film Billy Taylor: American Hero was made in 2006.
__________