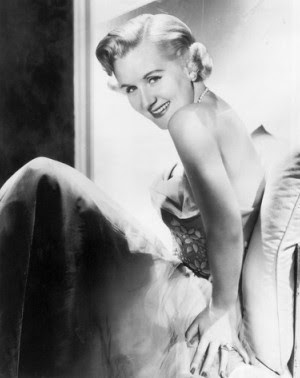 Margaret Whiting, a pop singer for television, film, cabaret and Broadway whose recordings of such standards as "That Old Black Magic" and "Come Rain or Come Shine" sold millions of copies in the 1940s and '50s, has died. She was 86.

Whiting died Monday at the Lillian Booth Actors' Home in Englewood, N.J., said Jordan Strohl, administrator for the retirement home. The cause was not given.

Blessed with a distinctive voice and a warm, insightful singing style, Whiting had a career that stretched over seven decades. She recorded for the first time while she was still in her teens and was still performing as a cabaret artist in her 70s and 80s.

Her duet with Johnny Mercer on "Baby It's Cold Outside" continues to be heard every holiday season. And as recently as 2009, her 1947 recording of "Time After Time" was heard in the film "Julie and Julia."

Whiting was born July 22, 1924, in Detroit. Her father, Richard "Dick" Whiting, was a songwriter. Her mother, Eleanor Youngblood Whiting, managed singers such as Sophie Tucker. Her aunt, Margaret Youngblood, was a vaudeville artist.

Raised in New York City, where her father wrote for musicals, and in Los Angeles, where he was active in films, Whiting was surrounded by entertainment-world icons. Judy Garland was a childhood friend. And on any given night she heard new songs from the likes of Cole Porter, Jerome Kern, George Gershwin and Harold Arlen.

One of the most important of those show-business friends was Mercer, who began partnering with Richard Whiting in the '30s, writing, among other songs, "Hooray for Hollywood" and "Too Marvelous for Words." After starting to sing, with Mercer's encouragement, as a child, Whiting began working with him when she was 7. When her father died in 1938, Mercer -- already her mentor -- also took on the role of surrogate father.

Whiting often mentioned the advice Mercer had given her when she announced her youthful ambitions to become a singer.

"One night when I was about 7 or 8," she told The Times, "my mother asked him to listen to me perform. When I finished singing, he called me over and said, 'I've got two words of advice for you: Grow up.' Then he said I should try and find a style that was uniquely my own."

It was advice that Whiting took to heart. Barely out of her mid-teens when Mercer and two partners formed Capitol Records in 1942, she became one of the new label's first signings. Her wartime recordings, her performances at USO concerts and her appealing, girl-I-left-behind charm established her as a favorite of young men in the armed forces.

Her first hit song, Mercer and Arlen's "That Old Black Magic," was recorded with the Freddie Slack Orchestra a week after Whiting's 18th birthday. A year later, she recorded her late father's "My Ideal," written in 1930. A string of her hits followed -- "It Might as Well Be Spring," "Come Rain or Come Shine" and "Guilty" among them -- resulting in more than a dozen records that sold more than a million copies each.

But what was to become one of Whiting's signature songs, "Moonlight in Vermont," with the Billy Butterfield Orchestra, almost wasn't recorded, because, she said, "I've never been to Vermont." Nonetheless, in Whiting's hands the song -- with its unusual six-bar phrases and lack of rhymes -- became a hit and an American songbook classic.

In the late 1940s, her maturing musical skills and expanding interests led Whiting into different stylistic genres. "Far Away Places," "Now Is the Hour" and "A Tree in the Meadow" continued her string of mainstream hits. But she also produced a series of duets with country singer Jimmy Wakely, with "Slippin' Around" crossing over into the wider pop audience.

Her successes -- more than 700 songs recorded and a dozen gold records -- reflected a natural ability, enhanced by her relationship with Mercer, to find material best suited to her interpretive style.

"I like to dramatize songs -- to tell stories," she told the Chicago Tribune in 1985. "I look for a terrific lyric and a wonderful melody, the kind you hear once or twice and your ears go up."

Whiting stayed with Capitol until the mid-1950s, when she and her sister, Barbara, starred in the CBS-TV comedy "Those Whiting Girls." Her recordings for Dot (in 1957) and Verve (1960) were largely eclipsed by the arrival of rock 'n' roll. But her last big hit, "The Wheel of Hurt," was released in 1966, after she returned to her old home at Capitol.

Her lifelong dedication to Mercer peaked in 1994 when Whiting became the head of the Johnny Mercer Foundation. In 1997 she starred in "Dream," a Broadway revue based on Mercer's music.

And in the last decade, Whiting, still active and buoyant, told Mercer stories and sang his songs for entranced audiences across the country in "I Remember Johnny."

Evaluating her own performances at the time, she told The Times, "I started out as a person who was musical, singing songs the way I was told they should be sung. Now, I am singing as a woman who has been through the ultimate experience of living."

Speaking of Margaret Whiting, Yahoo's The Judy Garland Experience is paying tribute to her all this week. Along with the weekly uploading of ultra rare Garland tracks we also have several rarely heard and never released Margaret Whiting performances.
Included in the mix is a complete set recorded at Rainbow And Stars in the late 80's, highlights from Margaret's stint as 1946's Voice Of Continental Can Company, television appearances, other concert performances, out of print studio sessions, and more.
If you are a Whiting fan you will not be disappointed:
http://movies.groups.yahoo.com/group/thejudygarlandexperience/