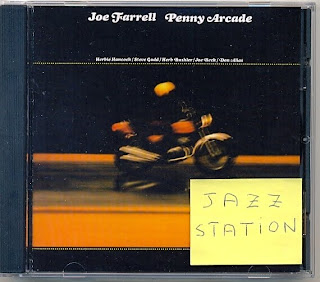 First CD reissue ever anywhere in the world (thanks to the wise guys of the Wounded Bird label) of this cult CTI album produced by Creed Taylor & engineered by Rudy Van Gelder in October 1973, with a cover pic by photographer genius Pete Turner.
Featuring Herbie Hancock (a killer Fender Rhodes solo on the landmark version of Stevie Wonder's "Too High" and dreamy acoustic piano on "Cloud Cream" and "Geo Blue"), Herb Bushler (probably the most underrated bassist of the entire fusion era), the impeccable grooves and massive breaks of drum god Steve Gadd, and the late Don Alias (congas on the latin-tinged "Cloud Cream" only, on which Farrell plays flute and piccolo) & Joe Beck, who wrote the frenetic title track and provided electrifying guitar solos throughout the session. Not to mention Farrell's dexterity also on soprano sax ("Too High") and tenor sax ("Penny Arcade," "Hurricane Jane" and "Geo Blue"). What else could you ask for?
One problem, though. This CD reissue preserves most of the original cover artwork conceived by CTI album designer Bob Ciano (including the liner graphics and Joe's portrait by Sheila Green Metzner), but doesn't reproduces the original "CTI label," which means that the composers are not credited anywhere! The CTI logo was also deleted.
Another mistake: the info "released as CTI 6034 in 1973" is wrong. The album only came out in January 1974.
ps: certainly, CTI's top connoisseur Doug Payne will post soon about this reissue on his Sound Insights blog.

That's what they say:
"Killer CTI work from Joe Farrell – with grooves so sharp you could cut your trousers on them! Farrell's angular reed style is in perfect form here – grooving with a small group that includes Herbie Hancock on piano, Joe Beck on guitar, Steve Gadd on drums, and Don Alias on percussion – a combo that's got a harder, tighter feel than most CTI groups – a key reason why Joe's records of this time are so legendary! The album features a fantastic version of Stevie Wonder's "Too High" – one that breaks all over the beginning with these riffs by Farrell, then grooves into a CTI electric funk mode for about 13 minutes. All tracks are long – and other tracks include "Hurricane Jane", "Geo Blue", "Penny Arcade", and "Cloud Cream"."

For more details, please check:
http://jazzstation-oblogdearnaldodesouteiros.blogspot.com/2010/11/three-of-joe-farrells-cti-gems-will-be.html
Posted by Arnaldo DeSouteiro at 8:47 AM