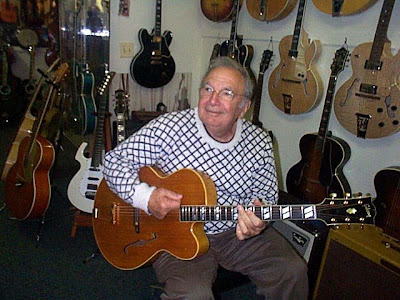 Although Bucky Pizzarelli, the guest of honor at the 92Y Lyrics and Lyricists season-opening program on Saturday, didn't amble onto the stage until the second half of the evening, his voice was heard in recorded sound bites jovially reminiscing about his life and times as a session guitarist.

The show's title, "Frank and Tony and Peggy and Me: Making Music With the Great Singers," referred to Mr. Pizzarelli's multidecade status as a preferred sideman to the stars, including Sinatra, Mr. Bennett and Ms. Lee. Its M.C., his son John, who has a way with a pun, wittily described his father, who recently had his gall bladder removed, as Less Gall (after Les Paul). John's easygoing humor lent the show the same lift that infuses all his performances, reminding you that ensemble jazz can be a kind of familial high, even if the other musicians aren't all blood relatives.

The show jelled the moment Bucky, who turned 85 on Sunday, and John began playing guitar duets. A humorous "Honeysuckle Rose" gave way to "Sing, Sing, Sing," with the house band -- in which Ken Peplowski saluted Benny Goodman's spiraling clarinet, and the drummer Tony Tedesco recalled Gene Krupa -- bringing the staid audience to its feet. Filling out the quintet were the young jazz violin whiz Aaron Weinstein, Larry Fuller (the pianist in John's group for the last five years) and Martin Pizzarelli (Bucky's younger son) on bass.

John Pizzarelli's group, one the finest traditional ensembles in all of jazz, has refined a light, lilting swing style whose steady, subtle bounce evokes a musical-cosmic trampoline on which you float rather than jump. The father-and-son showpieces were connected by Bucky's gently lyrical solo, "This Nearly Was Mine," fleshed out with jazz chords and blues-inflected embellishments.

The first act was a career retrospective, narrated by John and illustrated by slides, that carried Bucky from the swing era through his days as a sought-after rock-'n'-roll session guitarist. The guest singers Jessica Molaskey (John's wife and his co-artistic director for the show), Judy Kuhn and Darius de Hass sang tongue-in-cheek renditions of hits of Dion and the Belmonts, the Four Seasons, Leiber and Stoller and Neil Sedaka on which Bucky had played guitar.

In Act II they returned for more serious renditions of "The First Time Ever I Saw Your Face" (Ms. Kuhn), "Georgia on My Mind" (Mr. de Haas) and "Cry Me a River" (Ms. Molaskey).

A loving birthday message from Dion DiMucci was read. Later John played a specially revised version of Dave Frishberg's "I Want to Be a Sideman," for which Mr. Frishberg had written a lighthearted new verse in praise of Bucky. Without high drama, flashy star turns and conspicuous one-upmanship, the show led you inside a cozy family circle where the joy of music making was an end in itself.
Posted by Arnaldo DeSouteiro at 5:22 AM