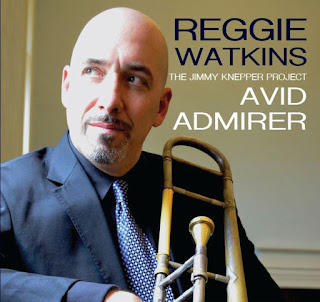 Trombonist Reggie Watkins had the opportunity to meet trombone master Jimmy Knepper just once, shortly before Knepper's death in June 2003. Watkins was performing in his native Wheeling, WV with Maynard Ferguson's Big Bop Nouveau Band, and Knepper, himself a Ferguson alumnus, was in the audience. The older musician complimented Watkins after the concert and shook his hand.

Little did Watkins realize that a series of remarkable circumstances ten years later would lead him to record an album of Knepper compositions, played on the late musician's Bach Stradivarius 36 trombone. The CD in question, "Avid Admirer: The Jimmy Knepper Project," is being released on Matt Parker's BYNK Records.

Watkins's third project as a leader, this new album was first set in motion by his mother Liz's friendship at church in Wheeling, circa 2013, with a woman who was the widow of Jimmy Knepper. After Maxine Knepper passed the following year, Jimmy's daughter Robin Knepper Mahonen donated her father's collection of musical instruments to Watkins. "Dad made me promise that his horns would go to a musician," Mahonen writes in the CD liner notes. "Reggie Watkins is the man that will take up these horns and give them a voice again."

"Avid Admirer" is a magnificent result of Mahonen's generous gift. It features the trombone virtuoso performing eight of Knepper's original compositions, as well as "Goodbye," a Gordon Jenkins ballad that Knepper had been especially fond of playing.

Matt Parker, the brilliant saxophonist who co-produced the disc with Watkins, alternates between soprano and tenor. (Parker worked alongside Watkins in Maynard Ferguson's Big Bop Nouveau from 2004 to 2006.) Orrin Evans and Tuomo Uusitalo take turns at the piano. Bassist Steve Whipple and drummer Reggie Quinerly round out the quintet. They are New Yorkers all, save for the leader, who has long been based in Pittsburgh.

"I've always been a serious Charles Mingus fan and became aware of Jimmy Knepper's work through Mingus's music," Watkins says. "Having contact with Robin was the beginning of me exploring Jimmy Knepper the composer."

Watkins found "Avid Admirer," a swinging blues in B-flat from a 1957 Bethlehem album by Knepper with Bill Evans on piano, to be an ideal choice as a title for the present CD. "I don't know if I've ever enjoyed a session more," says Watkins. 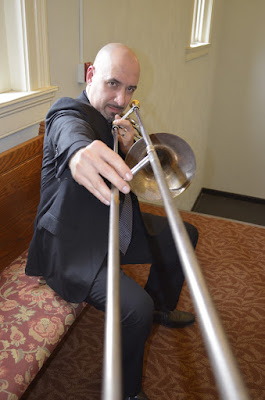 Born in 1971 in Wheeling, WV, Reggie Watkins played trumpet and tuba in high school before switching to valve trombone, then eventually slide trombone. It was as a music major at West Virginia University that he was first exposed to the playing of 'bone legend J.J. Johnson.

In Pittsburgh, Watkins was influenced by Roger Humphries, the local legend known for playing with Horace Silver on such classic albums as Song for My Father. Watkins became involved in various bands and gained a reputation for his strong, groove-minded playing.

In 1999, Watkins became Maynard Ferguson's trombonist, music director, and arranger. He is featured as a trombonist and arranger on "Swingin' for Schuur," the 2001 album the trumpeter made with singer Diane Schuur. The next year, Watkins recorded his first album, "A-List," which was part of the Maynard Ferguson Presents series. The recording featured his compositions and arrangements. "One for Miles, One for Maynard," his second date as a leader, was released in 2014.

"Reggie Watkins brings a sophistcated fire to his music that is infectious," says Matt Parker. "Working with him on The Jimmy Knepper Project showed me what it means to learn from the masters that came before us."

"I feel as if I have been set upon a wave of musical destiny that began a long time ago and could continue long after I'm gone," says Watkins. "What I hope for this record is that people listen, enjoy the music, and be compelled to further explore the music of Jimmy Knepper. I will forever be influenced and inspired by his artistry."
************
Photos: Sienna Watkins
Web Site: reggiewatkinsmusic.com 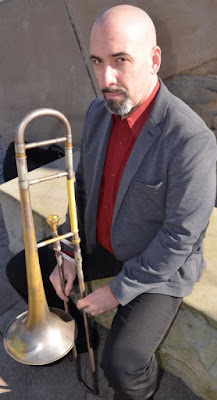 Posted by Arnaldo DeSouteiro at 11:29 PM