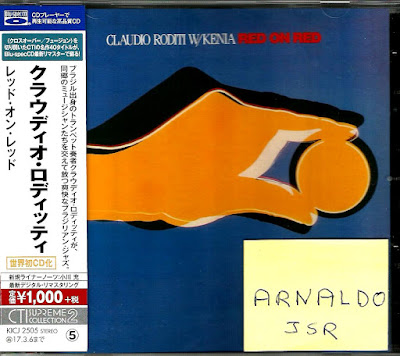 This is the first CD reissue of Claudio Roditi's debut album as a leader, which was the first album recorded digitally by Rudy Van Gelder at Van Gelder Studios as well as the first album produced by Creed Taylor using a 2-track digital recording equipment and, therefore, the first digital recording in the CTI Records catalogue, recorded "live in the studio" with no overdubs. Something that explains the fiery performances in all tracks, with a highly positive sense of urgency.

Kenia's warm voice can be heard on four tracks: Ivan Lins' "Madalena" (with a very nice set of unhauthorized English lyrics by Larry Galt, also recorded by Mark Murphy on his Ivan Lins Songbook titled "Nightmood" but mysteriously never approved by Lins' management), Milton Nascimento's "Nothing Will Be As It Was...Tomorrow" (that had been part of Flora Purim's repertoire since 1977 and receives a light funk-rock treatment here, provided by bassist Lincoln Goines' slap), Eumir Deodato's "Little Tear" (the new title, after Norman Gimbel added English lyrics, to the bossa ballad "Razão de Viver," recorded by Sarah Vaughan, but heard here in an update jazz-funk arrangement that includes one of Roditi's best solos on the album) and Edu Lobo's modern baião "Ponteio" -- a song Creed Taylor has always loved and recorded on "Astrud Gilberto with Turrentine" in 1971 -- but that here is reinvented with wordless vocals and a surprising rock groove that works pretty well with Claudio Celso's guitar crying behind Paquito D'Rivera's screams on the upper register of his alto sax.

Roditi's originals are all excellent: the baião "Amazone" (originally titled "Recife's Blues," featuring Naná Vasconcelos' triangle & vocal effects), "The Monster And The Flower" (co-written with Ricardo Silveira), the explosive jazz-samba "Pra Mim" and the title track "Red On Red." At that time, Roditi was a member of Paquito D'Rivera's group, and he was invited to record as a leader for CTI (in the U.S. the album came on the Greenestreet label) after Creed Taylor attended one of his gigs with the Cuban master at the NYC Blue Note.