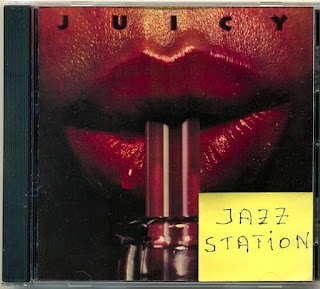 The debut album of the Juicy group -- recorded for Clive Davis' Arista label thirty years ago, having reached #57 on the U.S. R&B chart printed in Billboard magazine -- is finally out on CD thanks to guys at the Funkytwongrooves label, that licensed it from Sony Music, which now controls the Arista catalog.

Besides the eight tracks from the original LP release (mostly co-written by Charles Williams & E'ban Kelly), this CD reissue brings two additional bonus tracks: an extended remix of the up-tempo funk tune "I've Got Something", and an instrumental mix of the thrilling "Don't Cha Wanna" (the only song composed by all five members of the group), both previously available only on rare 12" vinyl EPs. All tracks produced by Deodato, fresh from his stint with Kool & The Gang that provided four million-selling albums for Robert "Kool" Bell & Co. featuring their vocalist J.T. Taylor.

Actually, that 1982 session for Arista was the only album recorded by Juicy as a "band". Three years later, once again under the guidance of the visionary Brazilian producer/arranger Deodato (mentioned in the CD liner notes, written by Randy Mahon, as "the Argentinian great Eumir Deodato" - Jesus!), the group was reduced to a brother and sister duo, with Jerry & Katreese Barnes using studio musicians in the making of their second album, "It Takes Two" (released in 1985 on Joe Isgro's Private I label, including their biggest hit ever, "Sugar Free"), followed by "Spread The Love" (Epic/CBS, 1987), their third and last album.

The duo toured extensively, opening for such artists as Maze, Cameo, Evelyn King, Hugh Masekela, Mother's Finest, SOS, Zapp, and Atlantic Star. As musicians, they have played with Roberta Flack, Chaka Kahn, Carly Simon, Bette Midler and Mariah Carey, being featured by Deodato in several projects that their artistic godfather produced for such acts like Chuck Mangione ("Disguise") and the late Gwen Guthrie ("Just For You") - not to mention Deodato's own "Happy Hour" album and the "Beat Street" soundtrack. Together or individually, Jerry & Katreese also recorded with The New York Voices, Stevie Wonder, Phyllis Hyman, Patti Labelle, Chic and even Justin Timberlake.
Posted by Arnaldo DeSouteiro at 10:29 PM