Fusion CD of the Month - "Bob James Quintet: These Are The CTI Years" 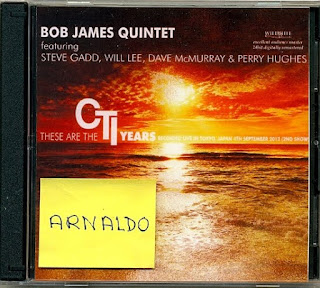 Fusion CD of the Month
Bob James: "These Are The CTI Years - Live in Tokyo" (WildLife) 2012

One of the best unofficial CTI releases to come out recently, Bob James' "These Are The CTI Years" hits the market soon after James' "CTI Years" Asian tour, which included five sold-out nights in Japan last Setember (three at the Tokyo Blue Note, one at the Nagoya Blue Note, and a big concert at the Tokyo Jazz Festival). This 2-CD set, essential for both Bob James and CTI fans, includes 8 songs taped with good sonic quality during the second set @ the Tokyo Blue Note on Sept. 4, plus 5 songs -- with excellent audio quality -- from the Tokyo Jazz Fest concert @ the International Forum Hall A on Sept. 9.

Leading a quintet with Will Lee (who recorded "Westchester Lady" on "Bob James Three," although the tune had been composed by Bob with the late Gary King on mind), Steve Gadd (the drummer in most of James' CTI sessions), Dave McMurray (a terrific flute & sax player, who pays tribute to Grover Washington and Hubert Laws, but shows he is his own man through his soulful playing in the woodwind instruments), and guitarist Perry Hughes, another splendid musician, able to keep the tradition of the late great Eric Gale and move it further, furbishing those down-to-earth blues lines with creativity and sophistication.

As expected, James reprises his main hits taped during the CTI heyday. Not only themes from his solo albums produced by Creed Taylor in the mid-70s ("Nautilus" and the aforementioned "Westchester Lady"), as well as tunes from projects he arranged for other CTI stars such as Stanley Turrentine (the title track from "Don't Mess With Mr. T"), Hubert Laws ("Farandole," also originally covered by James himself on "Two," with Laws featured on flute), Grover Washington, Jr. (the Ralph MacDonald-composed title track from the gold-certified album "Mister Magic"), Eric Gale ("White Moth" from Gale's "Forecast") and Chet Baker ("Autumn Leaves," the opening track from Chet's marvelous LP "She Was Too Good To Me.")
James, who plays acoustic piano, Fender Rhodes and, only occasionally, some synth parts to add subtle orchestral colors on such tunes as Marvin Gaye's "Don't Mess With Mr. T"), also includes two new songs on the menu: his own funkfied "Choose Me" and Will Lee's pop-ballad "A Simple Way To Say I Love You." As always, Steve Gadd plays superbly throughout the concerts, showing why he is known in Japan as Steve God! Bob James' CTI Quintet will be hopefully performing some concerts in the USA soon.