Fusion CD Reissue of the Month - "Moacir Santos: Carnival of The Spirits" 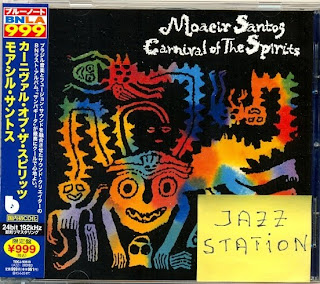 The third and final album that the Brazilian genius composer, arranger, vocalist & multi-instrumentalist (Brazil's top baritone sax player ever, besides his skills on alto sax and percussion) Moacir Santos recorded for Blue Note, "Carnival of The Spirits" finally comes out on CD format for the very first time.

The album was produced by Dale Oehler, who also arranged six of the eight tracks. Dale's scores are excellent (specially the latin-tinged "Sampaquita," the only song not composed by the leader, the 60s gem "Coisa No.2" and the gentle "Jequié"), but Moacir Santos' brilliant arrangements are the highlights, true lessons in orchestrations like "Quiet Carnival" and "Anon." In all aspects an essential item, one of the most important CD reissues of the year alongside Santos' debut album for Blue Note, "The Maestro" (featuring Joe Pass, Frank Rosolino and Clare Fischer), to be reissued this week in Asia.