Instrumental DVD of the Month - "Freddie Hubbard: Live in France 1973" 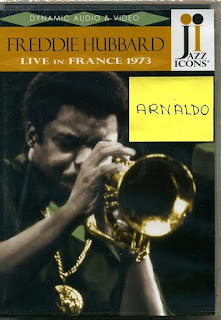 Instrumental DVD of the Month
Freddie Hubbard: "Live in France" (Mosaic/Reelin' in the Years) 1973/2012

At the apex of his soulful virtuosity, during his historic association with producer Creed Taylor in the early to mid-70s (he would re-sign with CTI in the late 80s, but the comeback album was never released and only a promotional single -- "Our Love Will Go On," the love theme from "Titanic" -- came out), Freddie Hubbard performs three anthems from his legendary CTI years during this incendiary concert taped in 1973: long versions of the title tracks from his albums "First Light" (who gave him a Grammy award) and "Straight Life," plus the speed-racer hard-bop gem "The Intrepid Fox" from his historic CTI debut "Red Clay."

Hubbard, my favorite trumpeter ever (Miles is the main revolutionary, the genius, but Freddie reached the highest levels of command on the instrument), appears at the top of his chops leading a group with his long-time keyboardist George Cables (heard exclusively on the Fender Rhodes), acoustic bassist Kent Brinkley (who recorded alongside Cables on FH's "Keep Your Soul Together" for CTI in 1973), the wild, very wild drummer Michael Carvin ("Elvin Jones meets Jack DeJohnette"), and tenor saxophonist/flutist Junior Cook (featured not only on "Keep Your Soul Together" as well as on the CTI out-takes collection "Polar AC."

The Paris concert was originally taped and broadcasted in b&w for the French TV show "Jazz Session," directed by Marc Pavaux, and produced by André Francis, Bernard Lion & Henri Rénaud. This DVD appeared last year in the latest box of the "Jazz Icons" series produced for release by Michael Cuscuna, but now is available as a single item. Both the artwork and the 12-page booklet include Neil Tesser's accurate liner notes, rare photos and memorabilia collage, such as DownBeat covers, ads and poll results from Hubbard's CTI years, album covers (with those gorgeous Pete Turner's shots), and even posters of his concerts with the CTI All-Stars. Many of these items have been featured here in the Jazz Station blog for years, reproduced from Arnaldo DeSouteiro's personal collection.
Posted by Arnaldo DeSouteiro at 9:39 PM