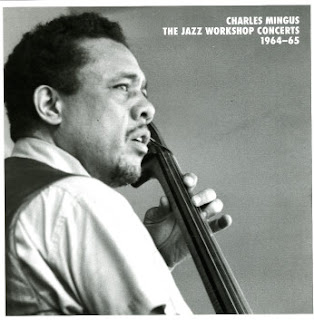 Key moments in the career of Charles Mingus – all recorded during the crucial years of 1964 and 1965, and featuring the first-time release of a fair bit of live material too! The set represents the first full presentation of recordings that have appeared piecemeal on a handful of obscure releases – self-released records from Mingus himself – "Town Hall," "My Favorite Quintet," and "Music Written For Monterey" – all really expanded here with the full recordings of the tracks, and unreleased titles provided from the original tapes.

Mingus was really on fire during these years – severed from most of his bigger label associations, and freely working on some of his most inventive ideas with various smaller groups of players – all fresh young talents who were key interpreters of Charles' ideas, including Johnny Coles and Lonnie Hillyer on trumpet, Jimmy Owens on trumpet and flugelhorn, Charles McPherson on alto sax, Clifford Jordan on tenor, Jaki Byard on piano, Eric Dolphy on alto sax, flute, and bass clarinet. The stalwart Dannie Richmond is on drums, and the sides represent some of Dolphy's last, and most important recordings on the planet – recordings done at Town Hall and in Amsterdam in April of 1964 – in addition to live material at Monterey in 1964 and 1965, in Minneapolis in May of 1965.

Tracks are all quite long – some pushing the half-hour timing – and as with the best live Mingus, there's variations here that go way past any studio readings – really incredible solo flights that are still beautifully integrated with the ideas of the main group. Titles include "So Long Eric", "Orange Was The Color Of Her Dress Then Blue Silk", "Mingus Piano Solo", "Bird Preamble", "Themeless Blues", "Copa City Titty", "A Lonely Day In Selma", "Cocktails For Two", "Praying With Eric", "Parkeriana", "ATFW", "Meditations On A Pair Of Wire Cutters", and "Meditations On Integration". 7CDs, limited edition, and with a great book of notes. Essential item for Mingus' fans.
Posted by Arnaldo DeSouteiro at 11:15 PM