Vocal CD of the Month - "Yvonne Washington: Trust In Me" 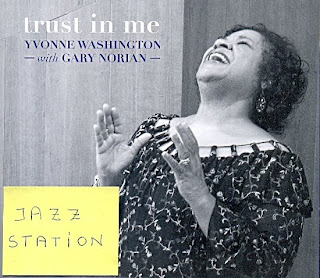 Vocal CD of the Month
Yvonne Washington with Gary Norian: "Trust in Me" (Mercator Media) 2011

Long one of the busiest and most versatile singers on the Houston scene, Yvonne Washington is about to step onto the national stage with "Trust in Me," her new Mercator Media CD. Pianist Gary Norian, her preferred musical partner for the last decade, arranged and co-produced the duo date, which highlights their unique musical empathy.

"Gary gives me the room that I need to move around," says Washington. "Stuff comes out of me that I didn't even know I had in me. Sometimes we get real surprised." In fact, the CD takes its name from the Etta James hit "Trust in Me" -- because "musically that's what we do," says the singer. "With the piano and voice fully exposed," adds Norian, "we hoped to achieve a simple, raw, and pure performance -- an intimacy that will beckon you right into the room with us."

Repertoire on the new disc consists for the most part of familiar standards, but what Washington and Norian do with "Pure Imagination," "My Funny Valentine," and "What a Difference a Day Makes" is quite uncommon. Washington's varied vocal influences include Mahalia Jackson, Shirley Caesar, Aretha Franklin, Jackie Wilson, Sam Cooke, Barbra Streisand, and Ella Fitzgerald. There's even a tip of the hat to Louis Armstrong in her playful reading of "A Kiss to Build a Dream On."

Drawing on those and other influences, including her childhood fondness for country music and her teenage infatuation with the Beatles, Washington has developed a singing style all her own, one that makes ample use of sustains and octave leaps and is rife with the syllable-splitting curlicues associated with gospel and soul music. And while she weaves wondrous melodic contours, her enunciation remains spot on as she cuts to the emotional cores of the lyrics. She is a jazz singer in the truest sense, and, as Norian notes, she never sings a song the same way twice.

"It's kind of like the best of both worlds," Norian says of playing for Washington. "I can get really deep harmonically and do very intricate, creative things, but it's tied in with the vocalist who's telling the story. I'm supporting that. I'm trying to make the sound more emotional and propel the pulse and the harmony so that the story can be told in the best possible way."

Born in 1949 in San Antonio, Texas, Yvonne Washington started singing in church in her teens, then at talent shows and in clubs in Austin, where she attended college. She also made her recording debut there early on, cutting an R&B single for a local label with trumpeter Leo Polk's band. In 1973 Yvonne and her husband relocated to Houston, and she's maintained a busy singing career with regular engagements in town as well as in Austin, San Antonio, and New Orleans. Her first CD, "Holiday with Yvonne Washington," was released locally in 2002. She was invited to Hollywood in 2000 to sing the title tune of the MGM motion picture "Autumn in New York" by Greg Curtis, a Southern California record producer who had once attended Houston's High School for the Performance and Visual Arts with her daughter. Although Washington's rendition didn't make the final cut of the film, it can be found on the "Autumn in New York" soundtrack CD on the Hollywood label.

Chicago native Gary Norian (b. 1964) began classical piano studies at age 6 but developed a passion for jazz piano in his teens. He studied at the University of Miami and credits pianist Vince Maggio, one of his instructors, for helping him develop an appreciation for the art of accompaniment. After a detour from jazz in the late 1980s as keyboardist with Exposé, a Miami pop group with six Top 10 hit singles, he moved to Houston in 1999 and settled into the jazz scene, performing with visiting New York trumpeters Randy Brecker and Marvin Stamm as well as with many Houston-area musicians. Norian released his own solo piano CD, "Heart First," in 2006, and with his trio backs Bryan Anthony on the vocalist's just-released Mercator CD, "A Night Like This." In recent years he's begun to compose tunes in the tradition of the Great American Songbook; both Washington's and Anthony's CDs feature brilliant originals by Norian.
Posted by Arnaldo DeSouteiro at 2:37 PM