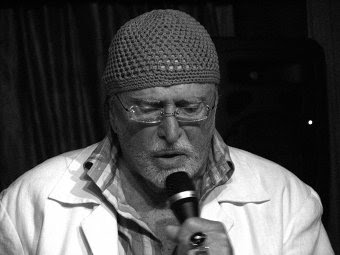 Mark Murphy turns 80 years young this year. He is famous for his soaring instrument and his distinctive vocal improvisations, with melody and lyrics. He was a recipient of DownBeat's readers' jazz poll for Best Male Vocalist in 1996, 1997, 2000, and 2001. Notably Mark has received six Grammy nominations for Best Vocal Jazz Performance. Among his best known nominated recordings are "Stolen Moments" (Muse Records), "September Ballads" (Milestone Records) and "Song for the Geese" (RCA Records). Mark's original lyrics to Oliver Nelson's "Stolen Moments" and Freddie Hubbard's standard "Red Clay" live on through vocal jazz programs all over the world today. From "Meet Mark Murphy" (1956) to the 2010 recording "Never Let Me Go," Murphy continues to attract audiences and fans around the world.

Roseanna Vitro: As a young man, what music first inspired you?

Mark Murphy: Art Tatum. I would go to my grandmother and uncle's house for Sunday dinners. All of my family were part of a local choir. My grandfather, Milton Cross, always listened to the Metropolitan Opera on Sunday afternoons. But when I was thirteen, what really caught my ear was Art Tatum's "Humoresque." I was always singing and fortunately I inherited my dad's glorious voice. Mom was a flapper and she knew rhythm and jazz. Dad knew oratorio church music.

RV: How early in your career did you start performing?

MM: As a young man, I didn't know anything about baseball or anything else but singing. I didn't have a voice teacher but as early as middle school, I was given all the solos to perform. To learn my parts, I just listened and copied. I was also influenced by my older brother who played the bass and my younger sister who was a first soprano. Early on, we listened to Benny Goodman records. I fell in love with Peggy Lee's sound, Sarah Vaughan, Ella, Arthur Prysock, Billy Eckstine and Nat Cole was my favorite. I listened to the radio constantly after I found a jazz station.

RV: Were you a disciplined student?

MM: To a point I was, because I was always singing and listening to the music. I have undisciplined ways. I don't just sit down and work. Sometimes I hear an idea in the morning and write it down and I never sing solos or phrases the same way, I'm not rigid. I remember hearing that Nat Cole practiced two hours a day. My practice evolved sitting in on piano with my brother's six piece band. When they rehearsed, I'd sit in and play piano and sing just playing the chords. My aunt played a little piano and she showed me the basics on "Lullaby of Rhythm." Later on, I took the bus from Fulton to Syracuse, NY to attend college I studied in drama school for four years and really dug Jack Kerouac. Kerouac's writing was very rhythmic, very jazz-like. His prose is divine.

RV: Your ballad singing is renowned. What is your focus when singing a ballad?

MM: I send out a beam of attention, like radar. I learned this from Peggy Lee. I used to watch her on Steve Allen's show. Peggy would sit there very still; she never took her eyes off the camera. You'd feel as though she was singing just to you. I see inside the song I'm singing as though I'm watching in a movie, always drawing the picture with my words and sounds. This is art.

RV: Do you have advice for today's young singers who are following in your path?

MM: Yes. Disciplined listening, studying the history and where the music is heading now a days. Go on an exploration of who's doing what and how they're doing it. See if it's something you can do. When I taught at the University of Music and Dramatic Arts in Graz, Austria, first I taught voice technique. But when the students learned good voice technique and would try to be creative and improvise, they'd forget their technique. You have to keep your technique and you have to always be creative, always exploring. A few of my students got it, like Tessa Souter and a girl from Belgrade that I first heard in Cape Town. It can take almost ten years to "originalize" your delivery. There's no particular method when improvising with lyrics, except to bend and caress the story and melodic ideas in your head as your singing, like painting a picture with your voice. Naturally, it depends on the tempo and the mood of the song. First chorus, tell the story in your own way and in the second chorus, continue to stretch and be spontaneous. I'm motivated by harmonics, like Jimmy Rowles and Peggy Lee. They played for years together. Your accompanist has a lot to do with how you sing, so experiment and choose your partner wisely.

RV: Drummers are very important. What do you like when choosing a drummer for your groups?

MM: First, I must have someone who knows how to play brushes. A musician with a wide rhythmic skill set complete with a bunch of mallets and the ability to make it sound like a big band if you want or a whisper. He has to connect with the bassist and invent a pulse for the pianist to float on. Then, I can float on top of this layer and communicate. I love percussive sounds. That's what your lips are for. [With] the tongue inside the mouth, there are around fifty articulations possible. This came to me bit by bit experimenting through the years. For a while, I couldn't find the right group of musicians in New York that booted me up. So I worked with a group from Cincinnati, Ohio, featuring Frank Vincent on piano for about ten years.

In closing I would like to say how important it can be for an artist's development to work with the same group consistently. I developed a repertoire and relaxation with my Cincy group. My singing evolved with a feeling of intense relaxation, always using my diaphragm and breathing specifically through my nose. This focuses the air stream as accurate as a hit with drum stick. Dave Lambert, one of my favorites, had that kind of control. He could read music or just blow long solos breathing through his nose with absolute accuracy.
**********
Mark Murphy will be honored on May 21st at the Blue Note Jazz Club in New York City in a show called "Celebrating Mark Murphy: A Life in Song," featuring a short film of Mark's life and a host of singers honoring Mark, including Sheila Jordan, Annie Ross, Steve Ross, Tom Lellis, Tessa Souter, Dena DeRose, myself and more. Mark is still singing great and teaching with every concert. For bookings, please contact Jean-Pierre Leduc at (514) 247-0706.
Posted by Arnaldo DeSouteiro at 9:00 PM