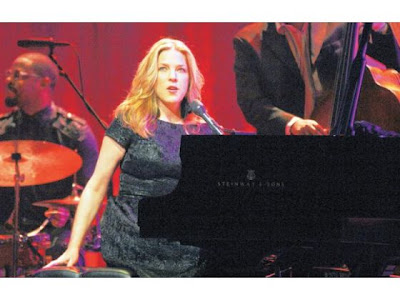 The performance was the first stop on the Canadian artist's 40-city 2012 Summer Nights tour.

Wearing her signature black dress, Krall opened the night with an upbeat rendition of "I Just Found Out About Love," which served as a playful introduction and set the tone for the entire performance.

Her sultry voice held listeners under a spell as she drew them up-close with songs such as Sergio Mendez's "So Nice," from her bossa-nova inspired album, "Quiet Nights," "I'll String Along with You" and "Love Scenes," which she dedicated to her family, 5-year-old twin boys and husband Elvis Costello.

Krall's jazz pianism took center stage throughout the night, enhanced only by the outstanding accompaniment provided by guitarist Anthony Wilson, bassist Robert Hurst and drummer Karriem Riggins. Their up-beat jazz performance, particularly during tunes like "Jockey Full of Bourbon," "How Deep Is the Ocean?" and "The Frim Fram Sauce" kept the audience tapping their feet and bursting into cheers and applause, always wanting more.

Krall seemed more at ease during her in-between-song chats, which despite being random anecdotes about growing up in Canada and life as a mother that seemed to be more notes to herself than anything else, provided a chance for the audience to laugh and relax and connect with her in a more intimate way.

"You've taken the position of a bartender, even though you are the ones who've paid the ticket," she said jokingly during one such chat. "That's okay. We're all in the same living room."

In her more intimate moments, when Krall played the piano by herself while the band took a break, she surprised the audience with a deliciously soulful performance of Cole Porter's "Don't Fence Me In."

Before returning to the stage for an encore that included "Walk on By" and "I'm Walking," Krall closed the night with Irving Berlin's "Cheek to Cheek," which she somehow managed to turn into a playful medley that included contemporary tunes like "Low Rider" and "Come Together," with the audience singing along.
Posted by Arnaldo DeSouteiro at 8:59 PM