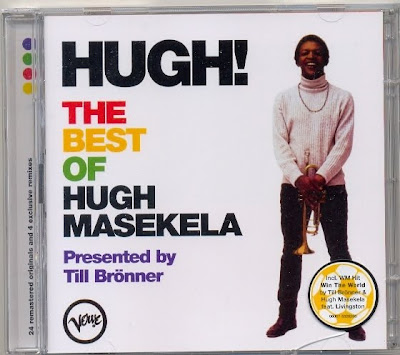 Turn up the heat with NJPAC's Cheza! Festival of African Music, February 24th and 25th!

Get your weekend jumpin' with the Afropop Dance Party, Friday, February 24th at 7:30. Party with DJ Segue Segue, creator of 91.5 FM’s Afropop Worldwide, spinning everything from old-school Afropop to the fresh new beats of today. Cash bar and refreshments available.

Then, feel the energy when South African, multi-instrumentalist Hugh Masekela graces the hottest stage in Newark. Rolling Stone calls him, "One of the most thrilling live performers around.” Experience the best of world music fusion, Saturday, February 25th at 7:30.

Hugh Masekela first picked up the trumpet in 1954. His music reflects his upbringing as a boy in Witbank, South Africa combined with his interest in the sounds created by African America musical pioneers such as Duke Ellington, Horace Silver, Ma Rainey and many others. Masekela was inspired to hone his trumpeting talent by Kirk Douglas’ portrayal of American jazz trumpeter Bix Beiderbeck in the film “Young Man With A Horn.” After leaving South Africa during Apartheid, Masekela, with help from Miriam Makeba and Harry Belafonte, began recording. Masekela has performed across the world, toured with Paul Simon, conceived a Broadway Musical (“Sarafina”), created the Botswana International School of Music, and has recorded dozens of albums.

At the end of January, Masekela released "Jubulani," his new CD, as part of the Listen 2 Africa Series from Listen 2 Entertainment Group. Sometimes wise, sometimes comical, oftentimes both, the 11-song set includes many traditional songs that date back several generations in South African wedding tradition. And Verve released "Hugh! The Best of Hugh Masekela," a compilation produced by Germany's top trumpeter Till Bronner.

DJ Prince Segue Segue (Sean Barlow) is the creator and producer of public radio's "Afropop Worldwide," the first nationally syndicated program in the US devoted to world music, and www.afropop.org. Hosted by Georges Collinet from Cameroon, the program reaches listeners throughout the US, Africa and Europe. He consults for numerous festivals, educators, film-makers, and venues.

New Jersey Performing Arts Center (NJPAC), located in downtown Newark, New Jersey, is the sixth largest performing arts center in the United States. As New Jersey’s Town Square, NJPAC brings diverse communities together, providing access to all and showcasing the State’s and the world’s best artists while acting as a leading catalyst in the revitalization of its home city. Through its extensive Arts Education programs, NJPAC is shaping the next generation of artists and arts enthusiasts. NJPAC has attracted over 6 million visitors (more than one million children) since opening its doors in 1997, and nurtures meaningful and lasting relationships with each of its constituents. Visit www.njpac.org for more information.

NJPAC is a wheelchair accessible facility and provides assistive services for patrons with disabilities. For more information, call 888-GO-NJPAC.
ORDER TICKETS & Get More INFORMATION about Hugh Masakela at NJPAC: http://njpac.org/show_events_list.asp?shCode=15828
Posted by Arnaldo DeSouteiro at 8:42 AM