CD of the Week - "Slivovitz: Bani Ahead" 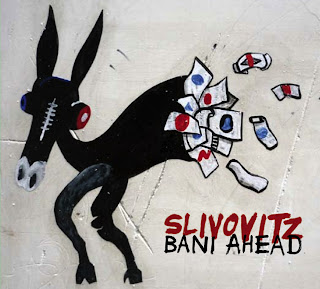 On "Bani Ahead," Slivovitz’s delectable instrumental casserole of violin, woodwinds, brass, harmonica, electric guitar, and potent rhythm section exhibits such finely-calibrated ensemble playing that the players sound like a single organism -- whether executing dizzying unison passages, engaging in ingenious dovetailing melodic counterpoint, or supporting an impassioned solo. There’s more richness of detail here than on any ten albums by the latest vaunted ‘neo-prog’ bands, with a wholly refreshing lack of attitude or affect.

Slivovitz’s music has been likened to that of the great Frank Zappa and at times recalls the rarefied chamber-rock of RIO artists such as Henry Cow. From the opener “Egiziaca” with its odd-metered Balkan-flavored melodic figures juxtaposed against gritty overdriven guitar, to the serpentine ensemble passages of “Cleopatra Through,” to the brooding, enigmatic “Opus Focus” (written by saxophonist Pietro Santangelo), "Bani Ahead" represents a new benchmark for a band quickly cementing their reputation as one of Europe’s leading purveyors of progressive instrumental music of any kind.