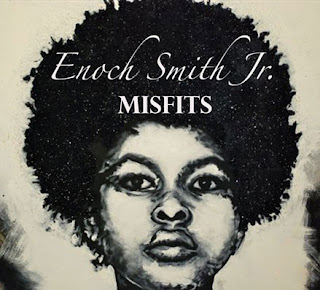 Pianist/composer Enoch Smith Jr. has taken his own unconventional path to a rising career in music, the latest chapter of which is the release of his CD "Misfits." The new disc, on Smith's label Music4MyPeople Entertainment, is an engaging follow-up to his 2010 debut "Church Boy."

"Misfits" boasts eight originals by the Rochester, NY native, including "Wise Man," inspired by Ellis Marsalis; the instrumental "She Moves Me," written for his wife Gabriella; and "I Want You," composed for the 2007 independent film of the same title.

The opening "A Misfits Theme" -- which contains the lyric "Misfit, misfit, misfit/You will never fit in/Nonconformist creature of peculiar inclination" -- draws on the feeling Smith had when he first attended Berklee College of Music. A self-taught musician with extensive experience as a church pianist, Smith auditioned for admission to the school at the suggestion of his high school choir director and was accepted on the spot. At the time, however, he clearly needed to upgrade his formal musical skills. His years at Berklee were "amazing and intimidating and exciting," says Smith, who possesses a rich touch and profound sense of melody and groove all his own. "I definitely saw that I didn't fit into the mold."

Throughout the album, Smith receives agile support from his rhythm team of bassist Noah Jackson, a former Detroiter whom he first met, and played with, at the Greenwich Village jazz club Smalls; and drummer Sangmin Lee, a Seoul, South Korea-born Berklee colleague who, when not playing jazz in the U.S., tours with Korean pop superstar Rain. The ringing alto tones of Sarah Elizabeth Charles are featured on six tracks. Saunders Sermons (formerly with Maxwell and currently with the Susan Tedeschi-Derek Trucks Band) sings on two selections, Mavis Poole on one ("I Won't Complain," Smith's arrangement of the classic 1990 recording by the late Rev. Paul Jones).

Misfits' other non-originals include the jaunty run through Duke Ellington's hit "Caravan" (here credited only to Duke's trombonist Juan Tizol); and Paul McCartney's "Blackbird," penned as a salute to the Civil Rights Movement.

"I've always loved the Beatles," Smith reflects. "I always loved the way they arranged music, the vocals, and some of the unorthodox recording techniques. And 'Blackbird' is a song that goes with the Misfits theme. It talks about being free and breaking out of the box and not being chained with the structure you're presented with."

Enoch Smith Jr., 33, is a true "church boy" who was raised in Rochester in the Church of God by Faith, a Pentecostal denomination, where he began singing at age 3 in the children's choir. He later played drums for services, then got a chance to sub for the regular pianist, making his way through trial and error. "Growing up and playing mostly in church, you get a whole different side of what music is all about," he says. "For me, it was always more of a spiritual connection than a connection of the head."

Smith continues playing piano in two churches, serving as music director for the Calvary Baptist Church in Paterson, New Jersey, and United Palace Cathedral, in the Washington Heights section of Manhattan, a large church founded by the late "Reverend Ike."

In addition to his musical pursuits, Smith works as an aide to New Jersey Assemblywoman Elease Evans, for whom he writes, reviews, and researches legislation and meets with her Paterson-area constituents. Law was his original career choice, and he'd done several internships at Rochester law firms while still in high school. Then came that life-altering Berklee audition.

Although Oscar Peterson is his favorite pianist, he has a special fondness for Bobby Timmons, whose soulful music "encouraged me that you can go down this road and be successful with the skills you have," says Smith. "Of course, you'll grow, but you've already got what you need. Just own it."