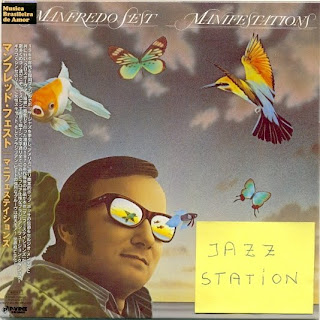 Manfredo Fest's third album as a leader in the USA, "Manifestations" was born in 1978 @ The Total Experience Studios in Hollywood and @ Kendun Recorders in Burbank. Produced for the Tabu label by Jerry Peters, who also arranged the date with Bill Holman, it reflects the disco-music heyday and was Fest's high-budget project ever, with large horn and string sections.

A new take on "Slaughter on Tenth Avenue" opens the disc, followed by some Fest's originals ("Jungle Kitten," "Arigo" and "Who Needs It"), Peters' "Koko and Leeroe" and a disco version of Bach's "Prelude & Fugue #2." Dated but exciting.
Posted by Arnaldo DeSouteiro at 8:06 PM