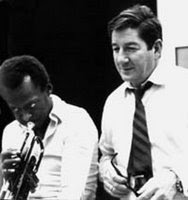 A very sad day.
A rare case of a record producer who was a genius!

Teo Macero, whose innovative work as a producer of jazz albums in the 1960s and '70s helped define the recorded sound of artists such as Miles Davis and redefine the meaning of studio production, died Tuesday at a hospital in Riverhead, N.Y. He was 82.

Macero, who lived in Quogue, N.Y., had been ill for some time, said his stepdaughter, Suzie Lightbourn of Morristown, N.J. The cause of death was not given.

The thousands of recordings produced by Macero include the original cast album of "A Chorus Line," Simon and Garfunkel's album "The Graduate" and numerous gold records.

Beginning with his work at Columbia Records in the mid-1950s, Macero helped make some of the most enduring jazz recordings of the era. He was musical editor for Duke Ellington, Thelonious Monk and Charles Mingus.

Later he became a producer and exerted an even greater influence on the music.

For many years he produced Davis, including albums such as "Bitches Brew," "In a Silent Way" and "Sketches of Spain." Although Davis had the final say, Macero was given wide latitude -- and he used all the space given him to express his creativity.

"I mean Miles never came to the editing room," Macero said in an interview posted on Perfect Sound Forever, an online music magazine. "In 25 or 30 years he was there maybe four or five times. So I had carte blanche to maneuver, do things with his music that I couldn't do with other people's."

Macero spliced tape, used overdubbing and pitch manipulations and employed electronic effects. Columbia Records sometimes had to create the equipment Macero needed in production. The "instant playback" allowed a passage to be played back in defined intervals.

In those days, such techniques were not the common fare they are today.

"Even back then, we were always experimenting," Macero said in a 2007 edition of Remix magazine. "That was half the fun, to see what you could do with some of this stuff. It didn't matter if it was a monaural or a two-track tape machine -- if I could help make the music sound different or adventurous, I was right there."

Macero sometimes had to weave in "bits and pieces" of music that Davis had recorded on cassettes.

"Miles would say, 'Put this in that new album we're working on,'" Macero said in the Perfect Sound Forever interview. "I'd say, 'Look, where the hell is it going to go? I don't know.' He says, 'Oh, you know.'"

Their collaboration was legendary. But in later years, when the unedited recordings of some of Davis' works were released, some critics complained that Macero had been too heavy-handed. A writer for Slate magazine referred to Macero's work as "post-production meddling." Macero had strong views of some of the reissues.

"They're discovering the things that we threw out and they're putting them in," he said in the Boston Herald in 2001. "I wouldn't have anything to do with it. It's just a lot of blowing. What is that?"

Macero was born in Glens Fall, N.Y., on Oct. 30, 1925. His parents owned a restaurant, said his sister, Lydia Edwards. Early in his life, he took up the saxophone, and music became his passion.

After serving in the Navy in the mid-1940s, Macero earned a bachelor's degree in 1951 and a master's degree in 1953 from Juilliard School of Music. He received Guggenheim Fellowships twice in the 1950s and played saxophone with Mingus and many others.

The list of artists he worked with as producer includes Dave Brubeck, Mahalia Jackson and Leonard Bernstein. After more than 20 years at Columbia, Macero left and continued to work as a producer. He also composed for several ballet companies and was a composer and conductor with several symphony orchestras.

In more recent years Macero worked with Wallace Roney, Geri Allen and Robert Palmer and composed for television and film.

In addition to Lightbourn and Edwards, Macero is survived by his wife, Jeanne.
***********
Der Star im Hintergrund