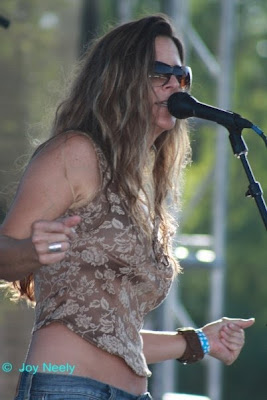 Currently residing in Los Angeles, Shari Puorto has been described as "a soulful singer with a sexy and raspy sound, she immediately brings Janis Joplin to mind. Like Joplin, Puorto is a passionate performer with an energy that can rattle the foam in a pint of Pilsner," according to Pubclub.com. You would think Shari's been doing this forever. She has the sensibility of an old soul reborn and is undeniably passionate. She is a powerful and dynamic live performer who quickly and quite naturally connects with her audience. (She's likely to steal your heart if you get too close!)

"Shari's amazing vocal strength and soulful delivery combined with her high energy live performance is a combination that makes her one of today's hottest performers," renowned jazz critic Jim Santella wrote. Among many accolades, Shari was awarded 'Best Female Vocalist' at the South Bay Music Awards. To really understand how she focuses on her blues-rock roots is if you combine Melissa Ethridge, Etta James, Bonnie Rait, and the soul of Janis Joplin.
Not only will her live performance blow you away but her recordings will too. "Puorto belts 'em out forcefully", Santella writes. You can catch this raw talent on her debut album, "Why is the Grass Always Greener?" "Packed with first-class energy and plenty of emotion", Santella writes.
Shari's recent work (in addition to performing with her band, "The Shari Puorto Band"), is co-writing, performing and currently in the studio with legendary producer/writer/musician, Barry Goldberg [Mike Bloomfield, Steve Miller, Electric Flag, Chicago Blues Reunion]. They will soon be releasing Shari's 3rd CD, "What Love Will Do to You", produced by Barry Goldberg & Shari Puorto. Additional wok by this duo is heard on Shari's second release ('08), "Down the Road".

At a very young age Shari was consumed by the power and expression of rhythm and blues and southern rock. Early memories are of Bill Haley & The Comets to the Doors to Led Zeppelin. Her influences range from Etta James, Aretha Franklin, Susan Tedeschi, the Black Crowes, Pat Benatar, the Doobie Brothers, Lynyrd Skynyrd, Koko Taylor and Eva Cassidy. In addition to being an outstanding vocalist, Shari Puorto is a favorite on local radio staions East to West.
"Her clear, forceful delivery and convincing expression bring it all home." Jim Santella 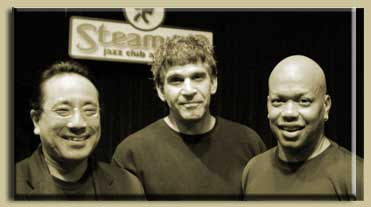 The Ron Kobayashi Trio consists of three uniquely talented musicians from the Southern California area; pianist Ron, plus Baba Elefante on bass and Steve Dixon on drums. Each musician brings with him years of diverse musical experiences. Kobayashi has performed with Mel Torme, Margaret Whiting, Eric Marienthal, Phil Upchurch, Teddy Edwards, Tim Weisberg, Kenny Burrell, Paula Kelly Jr. and The Modernaires." He was a featured performer on the internationally distributed "Johnny Yune" television show, and has been featured on the CBS Evening News with Dan Rather. In 1992, Ron performed for President Bill Clinton and has recorded as a solo artist for the Casierra Record label.

The trio has played numerous jazz festivals including the San Bernardino Music Festival, The Orange County Art and Jazz Festival, the Dana Point Jazz Festival and the Mission Viejo Music Festival, as well as the Colorado Belle Hotel and Casino in Laughlin, Nevada. The recent Ron Kobayashi Trio CD "No Preservatives" received nationwide airplay. Their earlier disc "Exotic Places" made the "Top 30 Albums" in 1998 on radio station KSBR. In 1996, the ensemble was voted "Best Jazz Group in Orange County" by readers of O.C. Weekly.
Posted by Arnaldo DeSouteiro at 7:30 AM

I was there at Steamers to enjoy Shari's vocals. She is an excellent blues singer and easily crosses over to jazz. Looking forward to having her sing with my band in the near future.
Of course I've had the opportunity to enjoy The Ron Kobayashi Trio also in the past.
His trio and Shari made for a great night of music.
Regards,
Neil Caplin