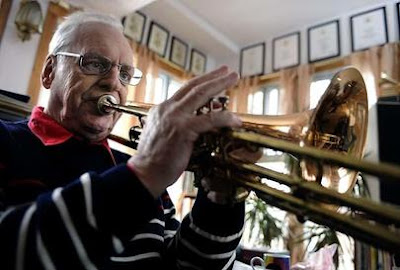 Bandleader and valve trombone player Rob McConnell, has died of cancer in a Toronto hospital on Saturday May 1. Known primarily as the leader and arranger of the internationally renowned Boss Brass, McConnell's arrangements for his band and numerous television shows set a standard and defined the Canadian sound for big band music for decades.

A unique musical voice, caustic wit and meticulous leadership on the bandstand were just a few of McConnell's trademarks, after launching the Boss Brass in the late 60s. Awards and honours for McConnell and the band were numerous, with multiple Grammy nominations and a win for best jazz big band in 1984 and three Juno awards in 1978, 1981 and 1984. In addition, McConnell was inducted into the Canadian Music Hall of Fame in 1997 and received the Order of Canada in 1998.

McConnell and the Boss Brass collaborated with many jazz greats over the years including Mel Torme and The Singers Unlimited and the list of musicians who played in the band reads like a who's who of Canadian jazz luminaries: Moe Koffman, Ed Bickert, Don Thompson, and Guido Basso are just a few.

The band last played a sold-out concert run in Toronto in December 2008, reviewed here by the Globe and Mail, which was recorded by JazzFM.91 and will be rebroadcast on Monday May 3rd.

As Rob McConnell's health worsened and trips to the hospital became more and more frequent, he was often asked by doctors if he had any allergies.

The award-winning jazz performer, composer and bandleader always gave the same answer: "Only to country music."

The response, a rehashing of an old joke by drummer Buddy Rich, encapsulated McConnell's unwavering devotion to jazz and comedy, friends say.

McConnell -- whose lengthy career encompassed 30-plus albums, multiple Grammy and Juno awards, as well as an Order of Canada -- died Saturday afternoon at Toronto East General Hospital. The 75-year-old had been receiving care for liver cancer.

"He would say there are only a couple reasons to play. One is to have fun. The other is to make some good music. I think he did both," said Ted O'Reilly, a friend and former host of the radio show, The Jazz Scene.

McConnell, a London, Ont. native, took up the valve trombone in high school. While he made a name for himself as a trombonist in the North American jazz circuit, McConnell established himself as a bandleader and songwriter in 1968, when he formed The Boss Brass.

The 22-piece big band, mostly made up of Toronto studio musicians hand-picked by McConnell, rose to international acclaim over the next two decades.

"(McConnell's) harmonies would just make the... hairs on the back of your neck stand. It was beautiful. It was thrilling," said Boss Brass trumpeter Guido Basso.

Basso remembers his friend of being able to charm an audience with his storytelling, and described McConnell as a comedian as much as he was a musician.

But McConnell also took his role as bandleader seriously. If a member's playing wasn't up to snuff, McConnell would speak up.

"He wouldn't be too diplomatic, but he always showed respect towards us," Basso said. "He was direct and honest."

McConnell would apply his exacting standards to himself. He lost some teeth after several falls during his illness, preventing him from playing as well as he wanted. He began giving some of his solos to other members of the band.

In 2008, McConnell reunited The Boss Brass for a three-night stand at the Old Mill Inn. Tickets sold out in a day.

"He just made great music," Basso said.
Posted by Arnaldo DeSouteiro at 7:30 AM