CD of the Week - "Slivovitz: Hubris" 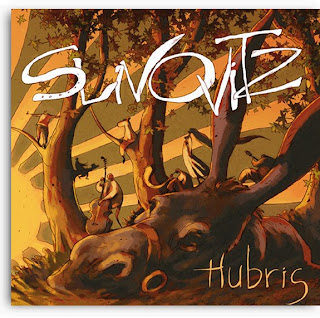 The seven-piece Slivovitz reside in Napoli (Naples), and are devoted to a poly-stylistic mangling whose forebears include Frank Zappa and John Zorn. Much of their core material also arrives from the folkloric knees-ups of the Balkan regions. Despite any avowed influences, the ultimate Slivovitz sound has evolved into a beast which is very much tethered to their own pole. The band take their name from the Slavic plum brandy that's a popular quaff across Central and Eastern European regions. Slivovitz developed a keen appreciation of their namesake tipple during regular gigging trips to Hungary. The band formed in September 2001, releasing their eponymously-titled debut album in 2004.

Recorded in Naples, Italy in 2008, except * recorded in 2004.
Produced by Slivovitz & Luca Barassi.
Graphics by Leonardo Pavkovic.

Album Profile:
Slivovitz's Hubris disc, their second, opens with a Middle Eastern shimmy, led by Domenico Angarano's slippery bassline, but moments later, as soon as Pietro Santangelo leads his horn attack, the mood is transplanted to Gypsy territory before exploding into a free jazz cacophony that could have been prompted by Frank Zappa. Such swift alteration of tactics is often the Slivovitz approach, usually within the space of a six minute composition. Santangelo's tenor and alto saxophones can be soothing as well as rippingly percussive, simultaneously inspired by Sonny Rollins and John Zorn. Slivovitz might take their musical foundation from the likes of Zappa, but they are also highly receptive to the ethnographic sounds of the globe.

These elements are confidently and knowledgeably handled, as they're fed through the jazz rock mincer. Voices and drums rattle out of the tribal village, but this folkloric authenticity is immediately followed by Hawaiian surf guitars in Senegal. Slivovitz don't quite engage in a fully disorientating cut'n'splice, but their pieces certainly slide through a number of contrasting movements. There's reggae, again given the loopy lilt that Zappa occasionally offered in this style, complete with vibraphone skitters and slithery voices.

At other points, there are also traces of Canterbury style jazz-fusion, with strong solos delivered throughout by Santangelo, guitarist Marcello Giannini and violinist Riccardo Villari. Singer Ludovica Manzo steps forward to lead a pair of wedding party scampers, with one of these boasting an incredibly abrasive harmonica solo courtesy of Derek Di Perri. Even towards the album's close, Slivovitz still have a few more stylistic surprises, with funky Brazilian samba rock and coasting Argentinean tango, paying homage, it seems, to Os Mutantes and Astor Piazzolla. Once bubbled up together, this astounding set of influences is distilled into the distinctively impressive Slivovitz sound.
Posted by Arnaldo DeSouteiro at 7:26 AM