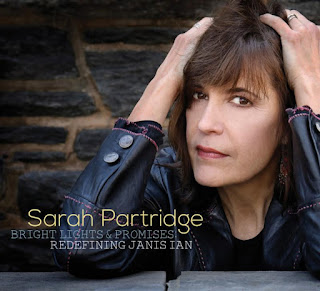 Vocalist Sarah Partridge introduced an impressive body of original compositions on her 2015 Origin Records release "I'd Never Thought I'd Be Here," but for her new project, she wanted to celebrate a singer/songwriter outside of her own genre and beyond the Great American Songbook. On "Bright Lights & Promises: Redefining Janis Ian," her 5th album and 2nd for Origin Records, Partridge reimagines 11 well- and lesser-known works from the legendary singer/songwriter's discography, and also co-wrote two with Ian. The new CD was released April 21.

"To pay tribute to a folk artist like Janis was extremely interesting to me," says Partridge. "In her case, her very early songwriting seemed influenced by jazz, and I saw real possibilities for a reimagining of some of that work. We connected with each other last year through the Recording Academy and when I mentioned that I was thinking of doing an album of her songs, she lit up. She said she'd like to be helpful to me, and there it began. I don't think I've ever met a more generous artist."

Ian exploded on the pop music scene in 1967's Summer of Love as a precociously talented singer/songwriter confronting the dark side of American life. She was just 14 when, in 1965, she wrote and recorded "Society's Child (Baby I've Been Thinking)," her single about a young interracial couple ripped apart by prejudice. Championed by Leonard Bernstein two years later on his CBS-TV special Inside Pop: The Rock Revolution, the single went gold and established Ian as one of the era's most promising young performers. She recorded several critically praised albums for Verve over the next few years but didn't break through again until 1975's chart-topping Between the Lines, featuring the Grammy-winning single "At Seventeen," a song she performed that year on the debut broadcast of Saturday Night Live (and which is included on "Bright Lights & Promises").

As with her previous Origin outing, Partridge is joined on "Bright Lights & Promises" by her stellar working band of pianist Allen Farnham, bassist Bill Moring, and drummer Tim Horner. Trombonist Ben Williams, reed virtuoso Scott Robinson, and guitarist Paul Meyers are also back in the fold. Farnham, who produced the album, arranged 11 of the songs; two were arranged by Horner. Janis Ianherself provides vocals on the wry and briskly swinging opening track "A Quarter Past Heartache," which the women co-wrote. 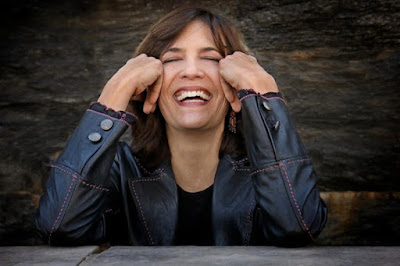 Raised in Boston and Birmingham, AL, Sarah Partridge grew up listening to her father's albums of Ella Fitzgerald, Dakota Staton, Irene Kral, and Sarah Vaughan. But she was drawn to acting and ended up majoring in theater at Northwestern University. After graduating in 1982, she worked around Chicago, and in 1983 landed her first feature role in Tom Cruise's breakout hit Risky Business.

Relocating to L.A. in 1984, she worked steadily in film and television, carving out a niche doing voice-overs. Out with friends one night at the Improv, she accepted their dare to take a turn at karaoke and delivered a stunning rendition of "Summertime." The impromptu performance caught the ear of a booker, who promptly hired her to sing in a concert with the top tier of L.A. jazz musicians. It was a successful gig that rekindled a long-buried dream.

Partridge spent years honing her technique in L.A. and New York City, where she moved in 1994, and instantly bonded with legendary trumpeter Doc Cheatham, "the first musician I played with in New York." Attending one of his regular Sunday brunch performances at Sweet Basil, Partridge's husband convinced pianist Chuck Folds to let her sit in. Her version of "Every Day I Have the Blues" went over well and Cheatham told her "You can come anytime you want." "After that, I sat in regularly and we did some gigs together," Partridge recalls. "I learned so much from him, just seeing the obsessive dedication he had. He was a real inspiration."

Partridge released her widely-acclaimed debut "I'll Be Easy to Find" in 1998 ("She's a pleasure to hear in any emotional guise, whether one of regret or exaltation" -- Billboard) featuring jazz greats Frank Wess, Bucky Pizzarelli, and Gene Bertoncini. She has grown exponentially with each successive recording: "Blame It on My Youth," 2004; "You Are There, Songs for My Father," 2006; Perspective, 2010; and "I Never Thought I'd Be Here," 2015.

With her rich, fine-textured sound and rhythmically acute phrasing, Sarah Partridge puts an irrepressible jazz stamp on everything she sings, and "Bright Lights & Promises: Redefining Janis Ian" presents a portrait of an artist fully in command of her craft.

Partridge and her band will be performing two CD release shows in May: 5/11 at New York's Bitter End (where Janis Ian performed nearly 50 years ago), and 5/20 at Trumpets in Montclair, NJ.