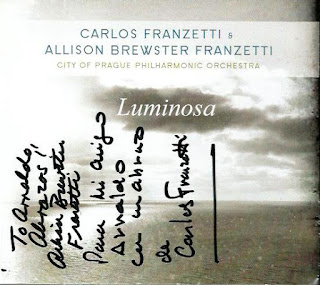 Excerpts from the liner notes by James Fitzpatrick:
"Carlos Franzetti is that rare Renaissance Man, partnered in his musical entrepreneurship by his colorful wife, concert pianist Allison Brewster Franzetti. With this release we find Carlos once again bridging that supposed gap between contemporary classics and the jazz and "easy listening" world. It also shows a more reflective Carlos with the title track, "Luminosa," which is seemingly contemplative yet has a strict Bach-like classical structure. "Tango del Eco" by Horacio Salgan, arranged by Carlos, is more playful yet has quirky harmonies that are not expected. In his music you can hear the influence of Shostakovich and de Falla, Dave Grusin and Piazzolla, George Gershwin and Cole Porter... "anything goes." Therefore, a work such as "Concierto del Plata" is both challenging (both for listener and soloist) and yet totally accessible but, most importantly, memorable in this age of forgettable and "throwaway" downloadable music. The three interludes from the ballet, "Dante Porteño" are just a taste of more to come from the ubiquitous and prolific pen (and mind) of Carlos Franzetti... a true original."
Posted by Arnaldo DeSouteiro at 10:36 PM