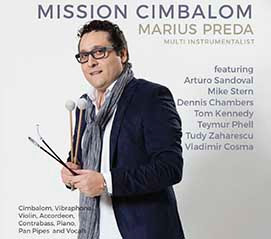 "Mission Cimbalon" features a cavalcade of top-notch jazz royalty, including Arturo Sandoval, Mike Stern, Dennis Chambers, Tom Kennedy, Teymur Phell, Sanah Kadoura, Taco Gorter, Robin Koerts & Kiba Dachi. It is Preda's life ambition to expose the world to this glorious instrument and to bring into focus its history and cement its place it the jazz canon.

The cimbalom is a concert hammered dulcimer: a type of chordophone composed of a large, trapezoidal box with metal strings stretched across its top. It is a musical instrument commonly found in Hungary and throughout the group of Central-Eastern European nations and cultures which composed Austria-Hungary (1867-1918), namely contemporary Hungary, Croatia, Romania, Moldova, Ukraine, Poland, the Czech Republic and Slovakia. It is also popular in Greece. The cimbalom is (typically) played by striking two beaters against the strings.

The steel treble strings are arranged in groups of 4 and are tuned in unison. The bass strings which are over-spun with copper, are arranged in groups of 3 and are also tuned in unison. The Hornbostel-Sachs musical instrument classification system registers the cimbalom with the number 314.122-4,5. Moreover, the instrument name "cimbalom" also denotes earlier, smaller versions of the cimbalom, and folk cimbaloms, of different tone groupings, string arrangements, and box types.

In English, the cimbalom spelling is the most common, followed by the variants, derived from Austria-Hungary's languages, cimbál, cymbalom, cymbalum, țambal, tsymbaly and tsimbl etc. Santur, Santouri, sandouri and a number of other non-Austro-Hungarian names are sometimes applied to this instrument in regions beyond Austria-Hungary which have their own names for related instruments of the hammer dulcimer family. 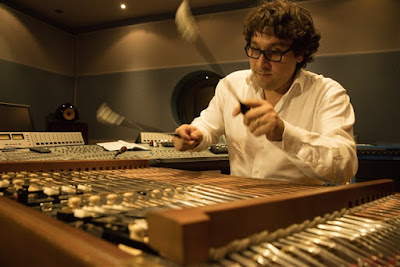 Marius Preda, born in 1977 comes from a musical family, where at the age of four, he received his first big toy from his grandmother. It was a Cimbalom! He immediately fell in love with this toy and wouldn't trade it for anything in the world! He spent all of his days and nights playing the new instrument.

In 1993, Marius was invited to the Netherlands, and in '95 he began to study the Vibraphone at the Jazz Department of the Royal Conservatory in The Hague, The Netherlands, where he graduated with a distinction. With the skills, he accumulated over these years, Marius was able to develop a new way of playing the cimbalom. As a result, he became the first cimbalom player in the history of Jazz.

Respected and lauded by other musicians for his mastery, Arturo Sandoval explains it best, "Marius is a gift from God for our own enjoyment," which Sandoval and Vladimir Cosma both were involved with the production Mission Cimbalon. Cosma explains, "Marius is one of the best musicians that I have worked with during my entire music career."
Posted by Arnaldo DeSouteiro at 5:38 PM