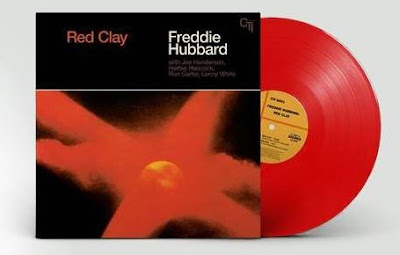 As the label’s first release, "Red Clay" established the soul-jazz-funk template Creed Taylor’s CTI imprint would follow for the next decade. Joined by the likes of Herbie Hancock, Joe Henderson, Ron Carter and Lenny White, Freddie Hubbard lays down bluesy hard-bop epiphanies, turning in one of his most memorable albums as a leader.

In addition to standing as a career-defining affair, the landmark 1970 effort also marks Hubbard's break from his Blue Note era and signals the fusion-minded direction he and other players would further investigate in the years to come.

"Red Clay" includes four great tunes composed by Hubbard: Besides the title track, which became a contemporary jazz standard, includes three other gems: "Delphia" (a gorgeous ballad dedicated to his mother, with Herbie moving to organ and Henderson playing flute), "Suite Sioux" and the explosive hard-bop "The Intrepid Fox." A CTI classic!
Posted by Arnaldo DeSouteiro at 9:50 PM