Blu-Spec Pop CD of the Month - "John Blair: We Belong Together" 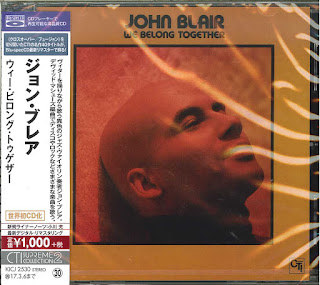 According to CTI supreme historian Doug Payne, "the CTI album is a strange mix of old rock tunes like "Roll Over Beethoven" and "Lucy in the Sky With Diamonds," peppered with an odd preponderance of tunes from England Dan and John Ford Coley ("We Belong Together" and "Don't Feel That Way No More" come from the duo's 1977 album Dowdy Ferry Road) and that duo's hits-writing guy, Parker McGee (who wrote "I'd Really Love to See You Tonight" and "Nights Are Forever Without You" - here with two tracks from the author's eponymous 1976 album, "Got That Feeling" and "Feather Lite & Honey Smooth"). Only Blair's own disco-y original "I'm A Wizard" even registers on the David Matthews-arranged CTI album. A hit that never was. But then, sadly, John Blair mysteriously disappeared from the musical radar..."The Master Creed," the electric violinist's only CD issued by the artist himself in 2004, was his fourth and final solo album, when Blair began to call himself John Ellington Blair to tap into his distant relationship to Duke Ellington."

Born November 8, 1943 in Toledo, Ohio, Dr. John Blair grew up in California and began taking violin lessons as a child, graduating with honors from Lincoln High School in San Diego in 1961.
Blair became a heavy academic, holding degrees from Eastman and Curtis conservatories. He even founded a school named The Universal Natural System.

A talented violinist and singer, Blair also created the Vitar, a combination of violin and guitar. He was featured on many jazz funk in the 70's and released a few sought after psych-funk releases on Mercury, Columbia and CTI.

Also according to my friend Douglas Payne:

"Talented and handsome violinist John Blair (1943-2006) had a sadly limited career. He was a creative and interesting violinist who had a hand in inventing and/or attempting to popularize an electric violin known as the Vitar, a cross between a violin, a viola and a guitar, that probably didn't become all that famous because it sounded like, well, an electric guitar.

Somehow, Don Sugarcane Harris and Jean-Luc Ponty made much greater names for themselves on the violin in the jazz world at the time - one as a cult fave and one as a pop phenomenon - than the unfortunate Mr. Blair. There were also fusion albums by violinists Michael Urbaniak, Didier Lockwood and others at the time. Perhaps John Blair just never had the opportunities the others had. Who knows.

Blair is also featured, however briefly, on Lalo Schifrin's theme to the short-lived TV series "Most Wanted," which appeared on the composer's album Towering Toccata (CTI, 1977). "I've used an electric violinist [here] who is fantastic," Schifrin enthused in a November 27, 1976, Melody Maker article. "His name is John Blair. He uses a five-string violin which goes to a low C like a viola. He plays very soulful, like Jean-Luc Ponty only more funky."