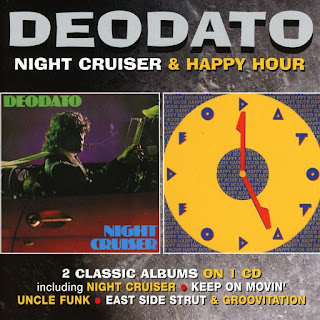 UK-based label Robinsongs, a division of Cherry Red, is reissuing on one CD the two last albums that Deodato recorded for Warner Brothers in the 80s: “Night Cruiser” and “Happy Hour," two jazz-funk trips. It is not a coincidence that the '80s had been a hectic decade for Deodato which had seen plenty of outside production projects, and they were mostly R&B acts such as Kool & The Gang, Con Funk Shun, Juicy, One Way, Gwen Guthrie and the Dazz Band.

“Night Cruiser” was originally released in 1980, The lead-off title track "Night Cruiser" begins with syncopated chords from a solo electric piano that initiates a four-on-the-floor disco-funk groove, the tune is a vibrant, get-down party piece that filled dance floors back in 1980. It was issued as a single (in both 7- inch and 12-inch formats) and rose to #23 in the US dance charts.

The album also features the stand out tracks "East Side Strut" (co-written by Deodato and Os Mutantes' founder Sergio Dias Baptista, also featured as a guitarist) and "Uncle Funk" (a theme by Banda Black Rio's bassist Jamil Joanes originally recorded as "Mr. Funk Samba".) As a bonus track you get the 7” version of "Uncle Funk." Musicians from Kool & The Gang and Platinum Hook (Deodato was producing their last album for Motown, which, btw, was completed but never issued) are heard throughout the album, along with drummer Stephen Daniels, percussionist Jimmy Maelen, bassist Gary Grainger and guitarist Ray Gomez.

The “Happy Hour” album was released in 1982 and features the track "Keep On Movin'", a Deodato original that has been sampled by several dance and hip-hop artists (including Olav Basoski and Le Tropical). The track was the first single from “Happy Hour” (it came out in both 7-inch and 12-inch formats with my favourite track "Keep It In The Family" on the B-side) in the spring of 1982 and dented the US dance charts, stalling at #41. The 7” version is included in this package as a bonus track. Deodato shares the keyboards with Mark Cohen, now known as Marc Copland.

"Happy Hour" was issued as the second single from the album in June 1982 and was something of a minor crossover hit, But it blew up even bigger in the American dance charts. You can definitely hear the influence for the 80’s Kool & The Gang albums within "Happy Hour," but adapted by the vision of brother and sister Jerry Barnes & Katreese Barnes, founders of Juicy.

Kelly Barretto, daughter of legendary conga player Ray Barretto, is the featured singer in most of the tracks. Cellist Kermit Moore contracted the string section, while Nelson Rangell plays alto sax on Smokey Robinson/Stevie Wonder's "Tears Of A Clown." Marcos Valle and Leon Ware co-wrote "Just This One Night," a mellow funk tune. There's only one instrumental track: "Sweet Magic," a pretty theme with Deodato on the Fender Rhodes. 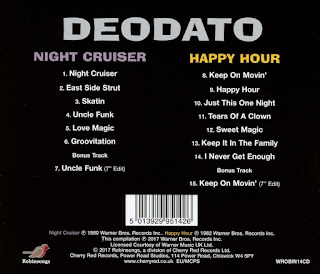 Posted by Arnaldo DeSouteiro at 9:51 PM